Game 32 (replayed here) was the 4th of 4 games with tommyg.  I won the game and the series.  I'm not sure if tommyg was playing at 100% or not.  His kingside pawns were all down the side and I was able to slip my white-squared bishop in the middle, fortified by a solid pawn chain.  He had a chance of whacking this bishop with his knight, but did not.

Later he played 14. Qa4+ and I had to place my knight between his queen and my king on d7.  His knight was also bearing down on d7 and he could have easily traded knights and queens and then it would have been a bit more difficult to get my rooks out and my king safe.

I now have 20 games left to play before August 6.  I should get a few extra games in during the week of June 21-28 during a family reunion.  My nephew plays chess and hopefully we can get a few long games in.  Then the weekend of July 15 there is a local tournament and I should get a few games in over that weekend.  So, in the mean time, if I can get 1-2 games per week on FICS, I should reach my goal of 52 games in 1 year.
Posted by rockyrook at 12:01 AM 3 comments: Links to this post

Isolated, backward or doubled pawns are often weak; however it is also true that sometimes they are not - other factors outweigh their potential weakness.

Doubled Pawns
a doubled pawn gives its owner an extra open file for coverage of critical squares that would not be possible if the pawns were un-doubled and 'healthy'.

Said Brent Larsen of this game, "In this variation, many endings are won with the aid of the seemingly humble [doubled] center pawns."

A pawn is only weak if the enemy forces can get to it.

Isolated Pawns
an isolated pawn is potentially weak because no other pawn can help defend it.  Since now pawns can stand by its side, the square directly in front of it also tends to be vulnerable.  However, it can control squares that might turn out to be useful homes for your pieces; there are open files on either side of an isolated pawn - a place for your rooks which can strive for activity.

An isolated pawn doesn't have to remain on a sickly square; it can advance and become a 'battering ram.'

If you advance and subsequently trade an isolated pawn, then the supposed weakness was nothing more than an illusion.

The most common type of isolated pawn tends to be the d-pawn.

Backward Pawns
the weakness or strength of a backward pawn depends on the following questions:
1. It is sitting on an open file?
2. How well is it defended?
3. Is the square directly in front of it adequately defended by pieces?
4. Is it serving a useful purpose defending the pawns that have gone ahead of it?
5. Can it successfully advance, thereby ridding itself of the 'backward' label?

If a backward pawn can safely advance then its weakness will turn out to be more illusory than real.

Passed Pawns
passed pawns are usually thought of as huge assets, offering great chances in an endgame, but they can also be a disadvantage.

You don't want a passed pawn if it can be blockaded, unless you have play elsewhere and the passed pawn acts as endgame 'insurance.'  The best blockader of a passed pawn is a knight, since its strength is no diminished by having a pawn in front of it.
Posted by rockyrook at 1:22 PM 1 comment: Links to this post

The first responsibility of the owner of the big [pawn] center is to make it indestructible.

Conversely, the responsibility of the player facing the pawn center is to apply constant pressure to it, and to try to prove it to be a weakness instead of a strength.

A center is only good because it restricts the opponent's pieces.  If it has to advance and give the enemy pieces good squares, then its whole purpose has been negated.
Posted by rockyrook at 12:25 PM No comments: Links to this post

I missed the last of our 4 games with tommyg on Friday night - it was a hectic day.  We are trying to work out a time to play that 4th game.

Tonight I played game 2 with gatoruss (replayed here).  The first game last week was pretty ugly.  I replayed that game a few times today and it was painful.  But tonight's game had a different outcome.  It was pretty interesting in the beginning and then he played 18...Nxe3?  I'm not quite sure what he was thinking.  But from then on, I just worked to try to trade pieces.  He made a second blunder with 24...g4.  My knight was pinned to my king by his queen and then he advanced the pawn attacking my knight.  But that left my queen to deliver check and then retake the pawn at g4.  At that point, I was up a bishop and knight.  He tried a few checks, but I secured the king and he resigned.

Game 3 with him may be next week, but being Memorial Day, we may delay game 3 until June 4.

Hey you Europeans ... check out my post on brunch and chess!  I'm up about the time you guys are having a late breakfast or early lunch - why not play a G/60 with me?
Posted by rockyrook at 10:21 PM No comments: Links to this post

I need something to motivate me to get up and get going in the morning.  The answer: a G/60 game of chess.

But who plays chess at that unseemly hour?  The answer: Europeans.

So, each week, I'll post which days I can play a G/60 and people can sign up by posting a comment on that post.  I may not get much response, but it's worth a try.

First come first serve - leave a comment to let me know which day you'd like to play.
Posted by rockyrook at 8:47 PM 4 comments: Links to this post

Space, as defined by Silman, is the "player's territory usually determined by the positioning of one's pawns."  It's the area of property behind the pawns.

The reason it's important: if you have more territory, you also possess more room in which to move around.


However, there is a "dark side of space"
Other rules
Posted by rockyrook at 5:04 AM No comments: Links to this post

Game 30 was game 1 in a new series - this time with gatoruss.  Not much to see in this game - just total crap on my part.  I guess one shouldn't multi-task when playing a game.  On the bright side, I had a pretty good night on ChessTempo.  Once I knew the game was lost, I logged on to CT and got a small bump in my blitz rating.
Posted by rockyrook at 10:40 PM No comments: Links to this post

I've found that certain pieces of music enhance my concentration.  Over the years, my "Concentration" playlist has grown.  I've noticed that a few of the pieces are a bit up tempo than most, while the majority of them are slow or relaxing.  Here's my 107 minute playlist with links to the songs on youtube.

There are lots more tracks in my library that could be on this list.  I've noticed I can go through this playlist twice in one 75 15 game.
Posted by rockyrook at 6:33 AM 2 comments: Links to this post

Game 29 was the fourth with Nygren.  Full game here. 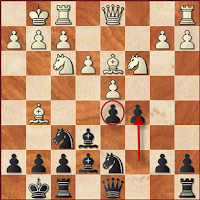 In our postmortem, he asked me what I was thinking when I moved 9...c5.  My thought, at that point of the game, was to try to open up the middle or move it along to c4.  I also wanted to get my rook on the c file.  He said that it wasn't a good move because it created an isolated pawn (on d5).  He was right.  I could not defend it well after.  He also noted that I should not have have been trading pieces with an isolated pawn; but that I should be supporting it and trying to advance it.  So, I was going about it all wrong.  But I really welcomed the feedback.  After doing a full analysis with Fritz 11, it didn't have any feedback for me on that move. 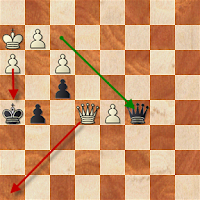 The game continued - his rook and queen were playing a deadly game of cat and mouse with my king.  I was trying desperately to get my queen back into the thick of things.  It was looking pretty clear he was going to win, and so I decided to try to last for as many moves as I possibly could; even trying to get a perpetual check so as to draw the game.  He was able to trade rooks with me and win my other glimpse of hope - a pawn with a wide-open file ahead of him.  Now he had a pawn in the middle heading to be queened.  My king was stuffed to the side and I was trying to get a perpetual check.  After moving 37...Qc5, I was expecting him to play either h4 or Qh8+.  After that, His pawn could just saunter on down.  But he played g4+ after which I played fxg3+.  39. Qxg3 would have been fine, but he played Kxg3?? after which I finished it off with Qg1#.

I felt badly for him.  The game was his except for that blunder.  He was very gracious in the postmortem and I was very appreciative of him playing me those four games and going over them.

Leave a comment if you want to play; or shoot me an email at hotmail dot com.
Posted by rockyrook at 5:20 PM 1 comment: Links to this post

Game 28 (replayed here) was against Tommyg again - our third of four.  I'm up 3-0 now.  It was a fairly even-keeled game ... no exploding fireworks.  I had a couple of long thinks on move 13 and 29.  But besides those, my thinking was fairly quick and concise.

Towards the end, I felt I had it wrapped up a couple of times, only for Tommy to pull out another move that made me pause and ponder.  He put up a really good fight.

I had to delay my game today with nygren ... my son's friend and his dad invited us to see the new stadium the Houston Dynamo are playing in.  We had to leave a bit early this morning and I wasn't sure if I started the game with nygren if we'd finish in time before we had to leave.  So that game is tomorrow morning.
Posted by rockyrook at 2:07 PM No comments: Links to this post