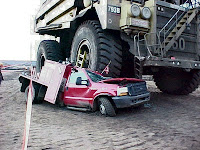 Posted by rockyrook at 4:30 PM No comments:

This ought to be interesting.

Here is the source:
www.bookwormroom.com/2010/04/20/ordinary-people-view-rush-as-a-dangerous-svengali/comment-page-1/

Here is the quote:


It’s also very frustrating to me because, in a funny way, I agree with my liberal friends that Rush can rejigger their world view very quickly. The only thing is that I don’t believe Rush works his magic through hypnotism and trickery. Instead, I think Rush’s real magic lies in his ability to view the political world as a vast chess board, one on which he can see multiple future moves; his prodigious memory; his well-informed mind; his logical analyses; and his funny persona. He convinces by appealing to our rational mind, our sense of humor, and our knowledge of the world as it is, and not as some Ivory Tower liberal tells us it should be.

Posted by rockyrook at 1:51 PM No comments:

Maybe it is because of the underdog theme, but I really enjoyed reading Mike Griffin's (rated 1813) post about winning 2 points from 3 masters.
Posted by rockyrook at 3:10 PM No comments:

Here are my March Goals with a status for each one:

Perhaps most of those goals were too ambitious in light of the fact that I don't have that much spare time.  So I'm going to re-focus on what really matters.

So I've been training since January and I think I'm ready to try my hand at chess boxing.  I'll be in Gaithersburg for a couple of weeks in May and while I'm out there, I'll be competing in a chess boxing event (in Richmond) on May 29.  If you're in town, stop by and cheer me on!

These Virginian hicks are in for a butt-kickin'

Richmond Chess Boxing League
Posted by rockyrook at 11:48 AM 2 comments: