I watched this video yesterday:

I did a little searching and found a few interesting tid-bits about George Scott and Stanley Kubrick.

Here's what wikipedia had to say about George Scott's performance in Dr. Strangelove. "Kubrick tricked Scott into playing the role of Gen. Turgidson far more ridiculously than Scott was comfortable doing. Kubrick talked Scott into doing "over the top" practice takes, which Kubrick told Scott would never be used, as a way to warm up for the "real" takes. Kubrick used these takes in the final film, causing Scott to swear never to work with Kubrick again." 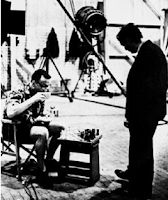 The entry went on to state: "During the filming, Kubrick and Scott had different opinions regarding certain scenes, but Kubrick got Scott to conform largely by repeatedly beating Scott at chess, which they played frequently on the set. Scott, a skilled player himself, later said that while he and Kubrick may not have always seen eye to eye, he respected Kubrick immensely for his skill at chess."
Then I read another article in which the interviewer asked Kubrick about chess:

"Q: You are a chess-player and I wonder if chess-playing and its logic have parallels with what you are saying?

"A: First of all, even the greatest International Grandmasters, however deeply they analyse a position, can seldom see to the end of the game. So their decision about each move is partly based on intuition. I was a pretty good chess-player but, of course, not in that class. Before I had anything better to do (making movies) I played in chess tournaments at the Marshall and Manhattan Chess Clubs in New York, and for money in parks and elsewhere. Among a great many other things that chess teaches you is to control the initial excitement you feel when you see something that looks good. It trains you to think before grabbing, and to think just as objectively when you're in trouble. When you're making a film you have to make most of your decisions on the run, and there is a tendency to always shoot from the hip. It takes more discipline than you might imagine to think, even for thirty seconds, in the noisy, confusing, high-pressure atmosphere of a film set. But a few seconds' thought can often prevent a serious mistake being made about something that looks good at first glance. With respect to films, chess is more useful preventing you from making mistakes than giving you ideas. Ideas come spontaneously and the discipline required to evaluate and put them to use tends to be the real work.

Q: Did you play chess on the set of The Shining as you did on Dr. Strangelove (with George C. Scott) and on 2001?

I played a few games with Tony Burton, one of the actors in the film. He's a very good chess-player. It was very near the end of the picture and things had gotten to a fairly simple stage. I played quite a lot with George C. Scott during the making of Dr. Strangelove. George is a good player, too, but if I recall correctly he didn't win many games from me. This gave me a certain edge with him on everything else. If you fancy yourself as a good chess-player, you have an inordinate respect for people who can beat you."

source: Wikipedia: Dr. Strangelove and Kubrick on The Shining
image source: Playing Chess with Kubrick
Posted by rockyrook at 5:07 AM