Last night before my last class, I was in the bookstore selling my books back as well as browsing the chess section. I picked up The Immortal Game by David Shenk and started reading bits of it. I think I'll read this book in a few months when I finish what I'm reading now.

Today I found an article about an interview between David Shenk and Kenneth Kidd. Now a couple of blogs have picked it up and have been discussing chess and religion.

JollyBlogger picked up the interview and had a little discussion on it. A Mormon blog ... Dave's Mormon Inquiry also discusses the topic.

All three articles are interesting reads.
Posted by rockyrook at 3:03 PM No comments:

No ... not with chess! I'm done with school! Last night was the last MBA class I'll ever attend. It may very well be the last "school" class I will ever attend ... I doubt I'll go for a PhD.

So now I can wholly focus my spare time on chess!

I've started the Level 20 tactics the other night. The long tactical haul continues. I haven't had much time to play on-line. I might be playing lots tomorrow, however, because a huge winter storm will be passing though and when it snows in Dallas, everyone stays home. So if you see me on FICS, I'd be happy to play a few 2 12's or something.
Posted by rockyrook at 9:36 AM No comments:

I'm satisfied with my effort in this game. What I'm not too happy about is my time management. After not using enough time the last few games, I decided to use as much time analyzing what I deemd were critical positions. The problem, however, is that I thought all my positions were critical and I ended up using too much time.

I used to think that 45 45 and 60 15 were too long. Now I think they are too quick. Had this game been 90 15 or something like that, I think I would have won. But towards the end of the game when I needed to use more time to analyze, I didn't have enough minutes on the clock to allow myself that comfort. Subsequently I missed a sweet tactic that Fritz pointed out. Up to that point, my game was pretty good. But as Mr. Heisman says, "you game is only as good was your worst move."

Here is the tactic I missed. 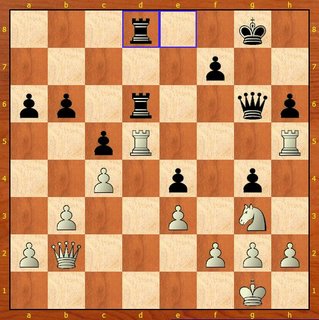 Again, because of time constraints, I didn't analyze all the checks, captures and threats. One of the candidate moves was indeed Nf5. But since I was rushing (and it was late at night so I was mentally tired) I didn't fully follow through on this line. I saw that I would hang my H rook and then failed to see that my D rook would win a queen if I moved Ne7+ (assuming he didn't move his king).

There is only one more round left in the Fall OCL. About Tal is dead last.

I've organized my studies a bit. I'm continuing to work on the tactics, but I'm not going to focus on them exclusively. I'm going to keep working on them for about 30-40 minutes a night. After tactics, I'll be reading through some games. I still need to finish Logical Chess Move by Move Every Moved Explained by Chernev. So I'm reading that book every night until I finish it. I've got all the games on pgn so I have the games in front of me as I read.

Lastly, after the Fall OCL, I don't think there will be any (on-line) tournaments for a while. I plan on trying to find one long game a week to keep up that end of the chess front. So if anyone wants to play some long games between November 12th and December 17th , post a comment and we can arrange a game. I play on FICS.
Posted by rockyrook at 12:29 PM 2 comments:

Read this enjoyable article about The Wonders of Chess.

students in the [chess] club improved their math scores on the Connecticut Mastery Test by 30 percent between fifth and sixth grade.

Be good to your kids if you want them to be good chess players,

Chess is not merely a brain game. It is also a game of neurons against
neurons. Obviously neurons with superior dendritic connections and complex networks would win. For building a superior neuronal network there are three requirements - a happy childhood, the right brain stimulating stimuli and a genetic endowment of excellent genes. A happy childhood depends on loving, caring and understanding parents.

A little more backgroud for the previous link.

My wife bought some of these the other day ... I had no idea they existed. Not only do they have chess symbols on them, but they are very delicious! Pepperidge Farm has some good stuff! 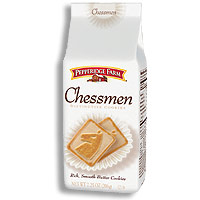 Posted by rockyrook at 2:23 PM No comments: