i'm on some kind of a streak now.

i largely suspect this is artificial improvement - i've not been doing any tactics or studying.  i've just been playing lots of blitz (casual and rated), with a smattering of classical games here and there.

it's so much fun to simply play.
Posted by rockyrook at 3:04 PM No comments:

thanks to lichess, when a player abandons the game, the player who stays can claim victory.  those situations aren't so painful.  i remember when i was actively playing on FICS, that unless both players had a certain variable turned on (i think it was "noescape"), if one player abandoned the game, the game would go into this limbo status where neither one could claim victory, unless the other ceded the game.  and if you wanted to claim the victory, you had to message the other player or contact the server admin - painful.

but then there is another class of sore loser - those who let their flag fall.  let me respectfully say "screw you" to those who are in a losing position and intentionally let their flag fall rather than resigning or even abandoning the game.  every single player who does this is automatically added to my block list.  i know, that doesn't sound so revengeful, but it gives me a certain degree of satisfaction.
Posted by rockyrook at 12:30 PM 1 comment:


I have two adult sons. One of them became an adult around the age of six. He followed the same life strategy from age six as Scott has outlined, and now enjoys great professional success and family satisfaction. Go figure.

My other son joined the Army because he needed the challenge and structure to keep him out of trouble. If he makes it to his late twenties without going to jail or getting killed, I think he will have a good life.

In my late twenties, while in graduate school, I joined my university chess team because I knew they would play the state penitentiary chess team, and I wanted to see the inside of a state penitentiary as a tourist and not as an inmate. As an unexpected additional player, I found myself playing against the prison chaplain instead of against an inmate. Looking around at the inmates, I said to the chaplain, "These guys look a lot like me." The chaplain said, "They look a lot like you, to me, too. Let me guess. You spent the last ten years in the Marine Corps." "Nine," I said. "If you had not spent the past nine years in the Marine Corps, you would have wound up here: at one time, young men like these, and like yourself, served society well; after all, Columbus needed sailors and Cortez needed conquistadores."

Not everyone can play the odds as an adult. Some people have a prolonged childhood and adolescence, not of their own choosing. They deserve better than prison and homelessness. Scott Adams did not select his genetics, nor his parents, nor his birth situation, nor his early adult character. He only thinks he made the choices he made. In actuality, life made those decisions for him. He put in the work, but then, he could not NOT put in the work, and he now enjoys remarkable success.

My older son has followed a path similar to that of Scott's, and I don't see that my son had any choice in the matter, either, except to act out what life had given him. In any event, I love and respect and admire both my son's; both the doctor and the soldier.

feel free to use and advertise!
Posted by rockyrook at 9:00 PM No comments:

state of my chess

in 2015 so far, i've played about 22 games.  i need to reach my goal of 52 games by the end of august.  this means i'm about 10 games behind.  but i think i'll be able to reach my goal.  most of my games are turn-based.  in fact, i've got an active game with robert pearson going right not - it's early into the match.  you can follow that game here.

unfortunately, this is about all the chess i can get in right now.  i started a new assignment at work and it does not leave much time for anything else.  every once in a while, i'm able to sneak away during lunch and solve some problems at chesstempo.  and once a in blue moon, i pull out chess book and read.

if anyone wants to play a 30 0 game or longer, leave a comment.  i play on chess.com or lichess.com.

and lastly, i'm sure everyone has already seen this, but in my effort to document chess violence, i needed to add this to the list: a 10 year old boy jumps to his death after being check-mated
Posted by rockyrook at 7:54 AM 3 comments:

of losing and pinewood derby cars 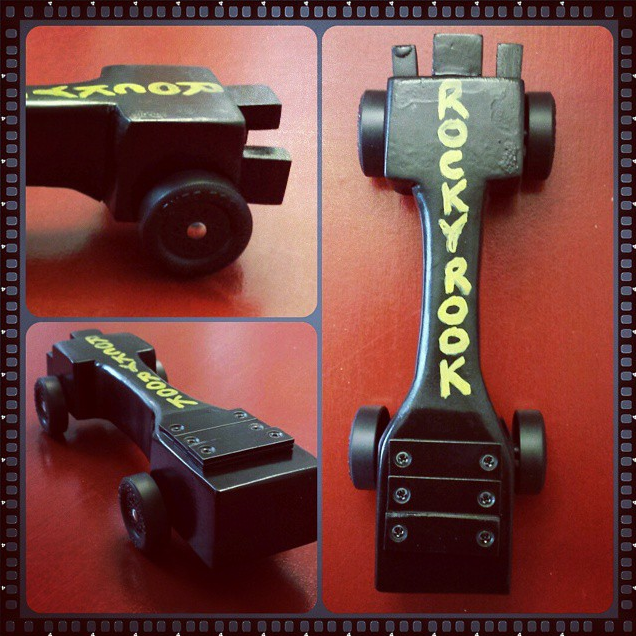 last fall, i got my 10 year old son to start playing chess.  i introduced him to fritz and chesster and he immediately took a liking to it.  we began to play several games a day.  i got him a chesskids.com account and he began to play lots more.

several years ago, i made a deal with my older kids that if they ever beat me, i would buy them a prize.  this motivated the two older kids for a while, but they never got close to beating me.  i made the same deal with my 10 year old, and he got to work!  he wanted to beat me.

when we first began to play, he would move quite fast.  but more recently, he has been taking his time and really thinking about his moves.  this week, we were playing our usual nightly game.  i was surfing the internet on my tablet while playing him.  but i was still trying to make good moves.  before i knew it, he had forked my king and queen.  i still wasn't too concerned, but then i failed to defend my back row and he was able to notice and deliver the checkmate.  it was over.  i was honestly stunned, but extremely happy at the same time!  he is a very modest ten year old and wasn't overly excited, but he was undoubtedly proud of his accomplishment!

coincidentally, this week my son and i worked on his pinewood derby car.  his idea was to make the car into a chess piece.  naturally, we decided to make it a rook and call it "ROCKYROOK"!

the derby is tonight; we doubt he'll win the whole thing, but it's always a fun event!

i wonder if the players at the tata steel tournament have a constant urge to urinate.

that's all i can think about every time i see the room they are playing in.

and seeing people standing in ankle-deep water like it's no big deal; makes my feet cold.

it must be torture playing in that hall.
Posted by rockyrook at 5:15 PM No comments: