Trying to forget about last night's ordeal on ChessTempo, I picked up the broken pieces tonight rather well. When I started, I was at 1809. I nailed several in a row, including one 2000+ tactic and my rating shot up to 1855. Then I missed five in a row before I was able to redeem myself a bit. I finished the night after 30 tactics with a rating of 1848.

I went over games 15 & 16 and finished off the section "The Kingside Attack." There wasn't anything particularly new that I learned. Both those games were pretty amazing. Chernev just reinforced previously stated ideas. In one game, Black moved his knight five times in the opening! Therefore his pieces weren't developed very well.

I played one 15 30 game tonight on FICS. The player was a newbie to the server. I won handily. I might log on later tonight and play some blitz games.
Posted by rockyrook at 11:55 PM 1 comment:

I was working the night shift last night when the huge ice storm that is sweeping the nation hit our area. It took me 5 minutes of hitting my doors, breaking the ice, to finally open the doors to my car. 15 minutes later, the ice was melting from my defroster. The company put us up in a hotel this morning so that we didn't have to fight the treacherous roads. There were hundred of accidents and I've heard of at least 6 deaths. So I slept all morning and into the afternoon while the cleaning maids kept knocking on my door ... I think I got enough sleep, but it wasn't very restful.

So when I worked on tactics tonight, I wasn't on fire. I was missing some easy mates and I was getting very frustrated. After doing 20 tactics, I dropped below 1800 to 1791. I was pissed. So I vowed to get my rating back up. I got several in a row correct and finished another 20 tactics with a rating of around 1810.

This reminded me of a time when I was playing this guy who I didn't particularly like. I beat him in a game of blitz and then he beat me two or three times. I was so ticked off. We played several more games and I demolished him. Is there something to it ... getting ticked off and then playing at a whole new level? Maybe I'm more like Rocky, the fictional boxer, than I thought I was. There's a whole other game going on up there in my head.

Game 14 was, yet again, about ripping open the pawn structure in front of a castled king. I noticed a pattern going over the game tonight. The two bishops, the d4 pawn and the queen all were placed in similiar positions as in game 13. 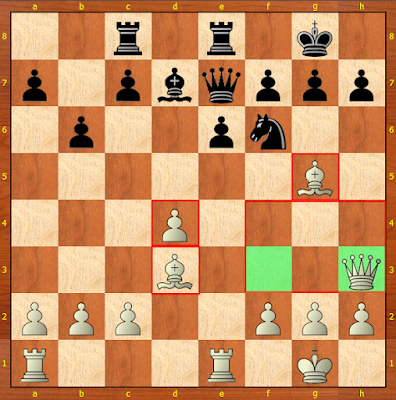 Compare this to the previous postion in game 13.

I played a couple of 15 5 games on FICS tonight. It was good just to get my feet wet again. I need to play a lot more 'standard' games. I lost the first one and won the second one.

Speaking fo 15 30 games, when is LEPers III? I'd like to get my butt kicked again.

Posted by rockyrook at 10:22 PM No comments:

I did around 20 today. I encountered 4 tactics that were in the 1900-2000 range and I nailed them (to my suprise). My rating jumped up quite a bit. But it all went to me head and I flubbed a few 'easy' ones and my rating dropped back to the low 1800's. But it was a good session.

I studied game 13 tonight. The theme was more about ripping open the castled pawns' structure. Here's how White did it. 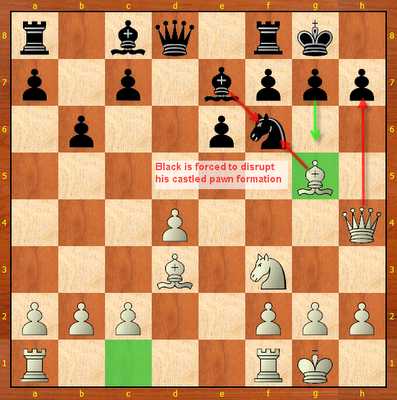 Later on, White came to this critical position. Do you know how he continued? When I analyzed the postion, I got a little ahead of myself. I had the right idea, but didn't quite get it. 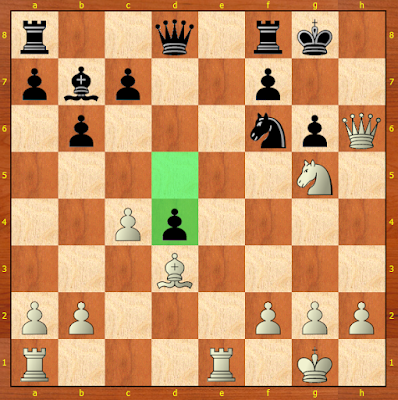 Posted by rockyrook at 11:19 PM No comments:

I wasn't hot today. I work a shift schedule and when I work the day shift, I lose lots of sleep. So today I was trying to stay awake while on ChessTempo. I managed to not drop below 1800.

I was able to make my moves today. I've got one game up to move 42. The rest have 14 and below moves in them. I drew one game today.

I worked on game 12 this evening. Another theme in this book, so far, is about not disrupting your castled pawn formation. If you do, then your opponent can find ways to rip it open. The best defense against someone ripping open your pawn formation on your castled king is to create action in the center.

In game 12, White fails to make anything happen in the center. As a result, Black is able to infiltrate White's territory and rip open the pawn structure on the castled king. 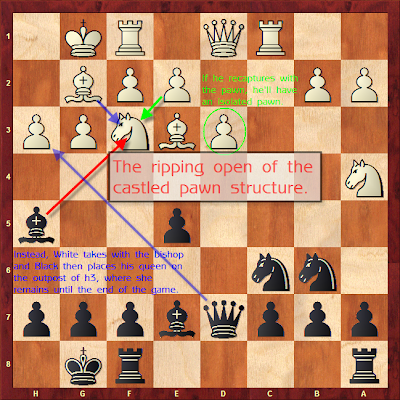 White's mistake was h3 after Black placed his bishop on g4.

That's all for today.

Pawns in the Center

I studied game 10. It was short and there wasn't a whole lot of content to the game. What I learned from the game can be summed up in one graphic (see below). I think Chernev's point of this game was "It is important to dispute control of the centre." 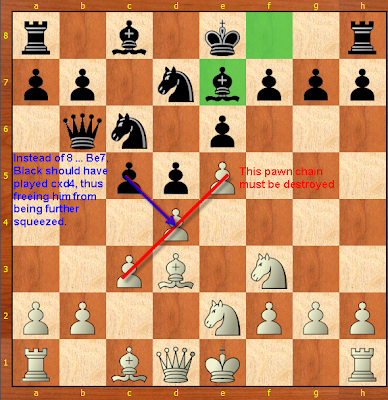 By not disputing control of the center, White was able to attack h7 after Black castled. White's knights also were well placed. Black had to disrupt his castled pawn formation. White was then able to decisively move in for the mate. Had Black disputed the center, he would have been able to defend the castled king and have a more open position with more options on the table.

I went over game 11 too today. This game reinforced previous ideas. The best thing I learned from this chapter was why we are to defend the center of the board. In all honesty, I've heard this advice many, many times, but have not heard many reason as to why. Chernev said,

"Anchor at least one pawn in the centre and give it solid support. Pawns in the centre keep enemy pieces from settling themselves on the best quares."

If we guard the center, our opponent cannot get a foothold with which to launch attacks on our king. If we control the center, we can launch our own attacks into enemy territory.

That is all for today.

Well, I'll see how long this lasts. Don't they say you need to do something for 21 days to make it a habit? So I'm going to try to keep this up for 21 days ... even if I have nothing to post.

I did 20 today. I went on quite a roll and rattled off 9 in a row and moved above 1800 for the first time in a LONG time. The minimum goal is 20 blitz tactics a day at ChessTempo. I was up over 2000 (blitz rating) quite a while ago, but dropped dramatically after the admin updated the algorithm for rating adjustments. So getting to 1800 after being in the 1750's-1780's for the last several weeks is a good sign.

When I started reading this book, I was updating a .pgn file with all the commentary Chernev wrote so that I could have the whole book in .pgn format. My reason for doing this is so that I can go back and read the book over and over again, but have it in .pgn file for easier reading. The downside to this is that it is so tedious. I'm up to game 9. But since I've been in this book for so long, I just want to get through it without putting pressure on myself to put it in .pgn format. So I'm just going to read the book and follow along in the .pgn file without worrying about typing it up.

Today I went over game 9. I would regularly ask myself what move I would make before looking at the next move. I've heard this is a great way to study GM games. I felt the cogs turning in my head and was much more into the book than if I had just read it.

I learned a couple of concepts from game 9.

Get the rooks out of their corners.

The other one is one particular paragraph. It says,


"Note that White has not embarked on dubious long-range combinations. His plan,
in most cases aimed at increasing his positional superiority, is made for a few moves only. Don't believe all those stories you hear of chess masters analysing intricate combinations with dozens of variations for thirty moves ahead. They don't do this because they don't have to! It is far easier and more to the point to look only a few moves ahead and try to maintain at least an equal game at every stage. Winning by accumulating small advantages is more consistent with a common-sense approach than to seek to overwhelm the opponent with bewildering combinations and venturesome sacrificial attacks. Strengthening one's own position gradually while undermining that of the opponent is more important than indulging in fruitless speculative fancies."

This is what the whole book is about ... how you go about identifying weaknesses in your opponent's game and how you can accumulate those small advantages.

That's all for today.
Posted by rockyrook at 4:12 PM 2 comments:

I want to keep a regular update of what I am doing day to day on the chess improvement front. So I decided to start recording the tedious stuff I do every day which in turn will help me stay focused on the larger goals.

I'll comment on grandmaster games I'm playing over, any stuff I read from books, how many tactics I did that day, any interesting comments on tactics, exciting games or positions I've played, etc.. If I come up with any hot chess opinions or discussion-worthy stuff, I'll post it on this blog.
Posted by rockyrook at 3:58 PM 1 comment:

Back in the day when I first started to really get into chess, the Chessville forum seemed to be the place to discuss all things chess. Now that forum has all but dried up.

ChessForums.org is my new preference. The people who frequent that forum seem nice and respectable and the content seems relevant and useful. I signed up today so I could start posting there.

Stroll on over there if you get a few minutes.
Posted by rockyrook at 1:28 PM No comments:

Half Sigma mentions chess a few times in his posts. His post today compares his thoughts about chess and painting. Be sure to read the comments too.
Posted by rockyrook at 9:30 AM 1 comment: 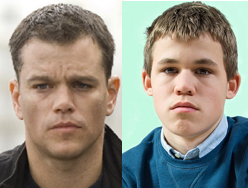 So I was at the gym the other day and was watching the TVs while I worked out. I thought I saw Susan Polgar being interviewed by CNN's Christiane Amanpour, but that didn't seem right. Then I adjusted my eyes and saw it was Tzipi Livni. 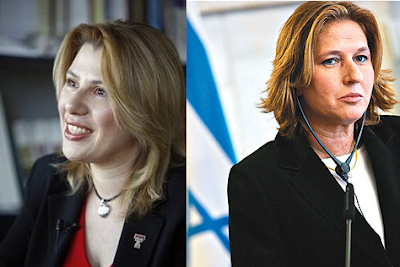 I think Scott Meyer's comic is one of the best out there right now.

He gave 'chess' a mention today.