We went over to our good friends' home last night after all our kids were in bed.  We watched some March Madness, ate good food and talked.  The men played some chess and watched some good basketball games while the ladies worked on crafts.

My friend and I have played once before.  He won that game with a pawn advantage.  Last night's game should have been an easy win for him when I blundered my bishop.  Chalk it up to one of those times when I see something that really isn't there.  So being down, I decided to just play wildly and try to get some perpetual checks to see if I could get it to a draw.  And amazingly, I was able to pull it off. 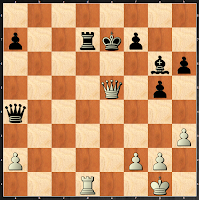 I had the white pieces.

We weren't keeping a move-sheet, so I don't recall all the moves.  He had a knight on d7 ... he had not castled.  I was able to line my rooks and queen on the d column.  I took the knight with my rook, he retook with his rook, I then moved QxPe5+, he moved  Kf8, I retook with QxR on h8+, he went back with Ke7.  From there, I was able to give perpetual check with either Qb8+ or Qh8+.

It was a fun game and we both agreed we'd need to play a few more times over the next few weeks.
Posted by rockyrook at 11:10 AM No comments: 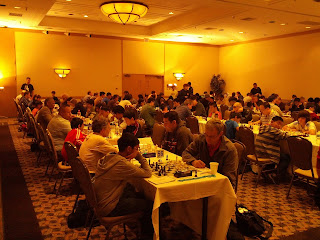 I didn't do too well in the U1800 section of the Lone Star Open this year.  I faced some pretty stiff competition the first two games.  In the first game, I ended up losing by a pawn ... when the endgame came, I could not keep his extra pawn from queening.  In the second game, I simply dropped my queen and then resigned.  The third game should have been a loss too, but my opponent couldn't pull it off, so we drew.  Then the 4th game, today, was a fairly easy win against a much lower rated player than me.

So, I've been doing a lot of thinking about what chess does for me.

After a Pros vs. Cons analysis, I found that:
- I love chess as a pass-time
- I love the thrills and intensity it gives (when there are good games)
- I enjoy the challenge of thinking under pressure
- I love trying to find and solve tactics

- I don't like 4 hour games ... especially when I lose games that are really close.  In long games, I feel deprived ... even when I win games.
- In shorter games, I don't feel deprived so much
- In longer games, I see lots of things - but what drives me insane is trying to keep track of all the different lines ... I sometimes feel like I'm going crazy trying to keep it all together

There might be more pros and cons ... but I think I came to a realization this weekend: I don't like long games.  My limit seems to be about G/60.  G/30 5 feels like a good time control.

Another thing too ... I don't like tournament chess anymore.

First,there was a wedding going on at the same time - across the hall.  They played bongo drums for about 30 minutes!  It was insane.  The TD let people who lost or drew that first round, re-enter for free.

Second, quite regularly, I try to chat with my opponent at the beginning of the game or afterwards in the skittles room.  More often than not, my opponent seems very anti-social and even sometimes rude.

Fourth, driving long distances ... the Lone Star Open was actually close to where I live, so I really liked the location of this tournament, but most of the other ones around Houston are on the opposite side of town.

All of this leaves me with playing shorter, more frequent chess games on-line.  I might still play an OTB when I have a free weekend, but I don't think I'll miss it much if I can't make it to an OTB.  I think I'm pretty content with finding 30 5 and 60 5 games on-line ... playing them in my comfortable, quiet and clean home.
Posted by rockyrook at 5:21 PM 2 comments: