Game 20 was a win against silencehunter.  So a bit of background first.  I own the 3rd edition of Reassess Your Chess.  Then I heard all the great things about the 4th edition, so I bought it for my birthday several weeks ago.  But I felt guilty for having never read the 3rd edition.  Therefore I decided to rapidly go through the 3rd edition before diving into the 4th. 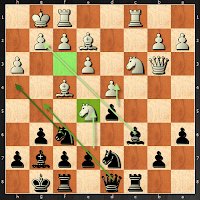 I'm still working my way through the 3rd edition, but sis advice about creating a plan seemed has stuck with me; especially the part where he says you look for your "dream position"  So in today's game, when I came to a point where I didn't really know what to do (up to that point, I was simply developing and defending my pieces) I started thinking about a dream position based on his weak pieces and squares.  I was fully expecting the plan to be foiled eventually.  But it wasn't.

After he moved 13. Ne5, I envisioned my knight posted at h4 (via h5, g7 and f5).  Then, somehow my Q would be posted at g5 bearing down on g2.  Then, if my e pawn could dislodge his d-pawn allowing my d-pawn to strike at his knight, my bishop would simultaneously be attacking g2.  This was the thought I had.

I could have been foiled fairly quickly after I played 13...Nxe5 14. Bxe5 Nh5.  At this point, I was expecting him to play 15. Bxg5, but he didn't.  He played 15. Bxg7 and then I responded 15...Nxg7.  I proceeded with the plan.  He started aiming (doubling rooks) for my remaining bishop.  But I continued with my plan by getting the knight and queen where I wanted them.  His attack on my bishop succeeded, so my bishop was now out of the plan.  I was able to get some counter play by checking his king with my knight (I need Fritz to analyze this part of the game - there might have been a forcing line in there somewhere), but he was able to pull back his rook and queen  .... now his king was fully defended and he was up two pawns. 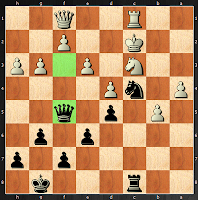 Now he had two pawns storming down the side with only my rook standing in the way.  My plan wasn't going too well.  But my knight and queen were still in play and his queen and rook were tied up defending his king - this left my rook free to roam.

Then he played 35. Nc3 and I quickly pinned his knight with my rook.  Then he played 36. Kd2 to defend his knight.  I checked him with my knight and then my queen.  He had one move: e4, which would win me a pawn back and put him at more danger.  All other moves were losing, but I had a feeling he'd play Kd1?  He was under a bit of time pressure.  He moved 38. Kd1 and I forked his king and queen with Nxd3.  He resigned.

It was a thrilling game and helped reinforce what I've read thus far from RYC 3rd edition.

Game 1 of 4 with silencehunter was a draw (link here).  He had me at one point, and I was holding on for dear life.  He was chasing down two isolated pawns.  He was about to take the 2nd isolated pawn, but did not - both to my surprise and delight.  I was able to then able to capture his bishop, but his two pawns and a rook flew down the side of the board.  If it were not for my rook and bishop, I would have lost the game.  It ended in a draw by repetition.
Posted by rockyrook at 4:18 PM 3 comments: 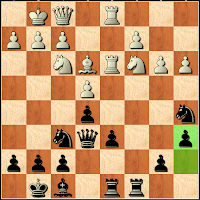 stevelco put the smack down on me again and won the series 3-1.  Except for his blunder in game 1, he would have cleaned my clock!

I was chatting with Steve after the game and I said to him "you know ... "they" say tactics are what win and lose games ... and i try to work on them ... but when you're in a 3-4 hour game and your at the end, it gets tougher"

And this is what happened in this game ... I just plain got sloppy toward the end ... I still had 20 mins on my clock.

Oh well ... the thought occurred to me after the game that maybe I need to push myself a bit more on my daily tactical study - to push the mental limits - get exhausted a bit (with more tactics) and then train through the mental exhaustion to try to replicate keeping on guard toward the end of the game.

The next 4 game 75/15 series begins Sunday morning with silencehunter ... someone a bit more in my rating range.
Posted by rockyrook at 11:28 PM No comments:

So my dilemma is focusing on minimizing misses of the 1600+ rated problems.  What's going on is that as the number of sub-1600 rated problems decreases, the vacuum is filled with 1600+ problems.

I've also noticed that on those "additional" 1600+ problems that I end up missing, I miss because I think I see the answer fairly quickly, but I don't, so I end up moving pre-maturely (more quickly) instead of taking extra time for further analysis.

So I downloaded my history and did some cursory analysis.

So half of those misses on the 1600+ rated problems were due to moving too quickly.

My conclusion: as I find my rating hovering in the 1690s, take a minimum of 65 seconds before I move, unless the solution is absolutely clear.

This analysis wasn't too serious, but I need to start playing with the data and thinking about these things now that I can download my entire history! :-)
Posted by rockyrook at 3:24 PM No comments:

Game 17 was another 60/15 game.  The quality of the last two games is not the highest.  In fact, my latest opponent must have thought (s)he accepted a blitz game.  I received two chats from *them*

Both of these IMs were after I took an excruciatingly 90 second think.  After blundering on the 10th move, *they* played a few more moves and resigned.

The quality should begin improving as I have a chance to even up the odds against stevelco.  He's up 2-1 on me and we should be playing this Friday night.

Also, I just signed up for another 75/15 match with silencehunter beginning this Sunday morning.
Posted by rockyrook at 8:51 PM No comments:

Game 16 was not pretty, but still an interesting win.
Posted by rockyrook at 9:01 PM No comments:

From March 11 to March 14, my evenings are wide open.  I'd love to have some long games scheduled each night.

Games 2 and 3 to stevelco were defeats.  Honestly, I should have lost the first game too.  Steve is a really good player.  I was proud of myself for hanging with him the first two games, but game three was different.

I stunk; big time.  I hate making excuses, but I do feel I need to document.

There are days when I really feel like playing and I have lots of energy.  Then there are days where there is nothing there ... it's just "blah".  Other days, I can at least manage to muster up some desire.  Last night ... and pretty much the whole week for that matter was a blend of mustering and just plain "blah".  You can't deny the fact that other life events affect your chess play.

Also - there are losses where I feel good about ... I know I did my best; I fought hard and thought deep and well.  Then there are losses like last night where there was no heart; I was a complete woodpusher.

So, as opposed to trying to think about how I can minimize my failures in thinking or calculating, I need to think of a way to rouse up the fight in me when there is no fight.  How can I, on a snap of the fingers, turn into a calculating, killer-move-seeking monster?  Days like yesterday; weeks like this past week ... they will come again.  What can I do to prepare for them?  How can I overcome them?  That's what's on my mind.

Here are the games as captured from surveybot.