I've been thinking a lot about endurance this week ... especially since my loss earlier this week.  Wasn't it Dan Heisman who said your game is only as good as your weakest move ... or something like that.  I felt I was playing pretty well the whole game.  Then I saw a way to promote my pawn.  Being under a bit of time pressure as well as being a bit tired (it was around 11:30pm at this point in the game), I simply didn't calculate well - I didn't count the squares the king was from a8.  And so I threw the game away.

Here is a link to the game.

So my thoughts, this week, have been directed at how I can maintain focus for the length of the 2-3 hour game.  I personally think this issue of lack of focus and enduring to the very end is a broader issue in my life and it just manifests itself in my chess.

One thing I've tried to change this week is in my exercise routine.  Instead of giving up when I'm feeling tired, I been trying to stretch myself into working out longer.  Before, I would bike for 20 minutes and jog for 20 minutes.  During those workouts, I'd take frequent breaks.  This week I've been focused on riding consistently for the full 30 minutes and then to push myself for the full 30 minutes at jogging.  I've been successful so far (Monday through today).  This is just one example, but I've been trying to keep the topic of endurance in my mind in all the things I do.  I aim to improve my endurance and capacity in all aspects of my life.
Posted by rockyrook at 4:12 PM 2 comments:

My first game of the year was a win.  You can replay it here on ficsgames.com. 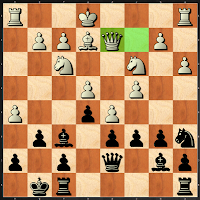 This was the move that started the chain of events.  A bit earlier in the game, I was trying to maneuver both knights and my white bishop to attack e4.  But he ended up taking one of my knights and then advanced his d-pawn.

I still needed to get my other knight off the peripheral - he wasn't doing any good there anymore.  So when he moved Qd2, it didn't take me long to move Nc5 (37.5 seconds to be exact).  The intention of course was to plant the knight on b3 for the fork.  He ended move moving his rook to b1.

My next move was a bit aggressive.  I plopped my queen on g4.  I had this idea for a while.  I was a bit unsure of this move, but decided to go ahead with it as it created an attack on g2 and e4.  I figured I could recall the queen back to safe land if the plan didn't fly.  He followed with g3.  I had a decision to make ... take e4 or pull back.  I tried to calculate as many possibilities as I could and I'm sure I was not thorough.  After over seven minutes of internal debate, I decided to go for it.  I thought he would move Nxe5 and we would go down the path of exchanging pieces, but he opted for exchanging the knights right away. 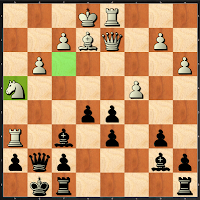 And then his blunder - Nh4.  Before he made this move, I was planning on e4 to bump his knight off f3 after which I'd follow up with the fork (Bf5), but he obliged without me even asking.

He played Nf5, I took his queen (check) and then moved my queen out of the way.  From there, I just needed to ensure I didn't stumble in the end.  There was still a possibility of him aligning rooks and bishop to attack h7.  But I managed it successfully, got rid of his knight and then eventually was forced to take his bishop with my queen after which I took his rook and I was up a full rook.  He capitulated fairly quickly - he didn't resign, but he didn't fight either.

As a side note, the time negotiations for this game were a bit strange.  But in the end, we ended up starting the game at 5:00am my time.  Early morning games aren't my preference, but sometimes you have to play at that time to accommodate the Europeans.  Even though I was a bit worried about lack of sleep, I was able to get a good sleep and my brain wasn't too foggy.  To help clear the cobwebs, I got up a few minutes before 5:00am and played a few games of Bejeweled Blitz.  I've found that playing Bejeweled Blitz is a great way to scan an 8x8 grid extremely quickly - I highly recommend this game!
Posted by rockyrook at 7:28 AM 1 comment:

T45 has just started.  My first game will be this week or next.

This is a trend I must reverse (link) 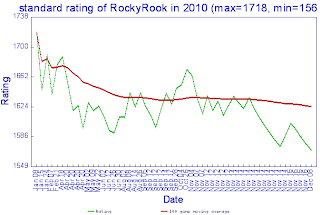 Posted by rockyrook at 8:55 PM No comments: