Chess Rage (on the iPad) 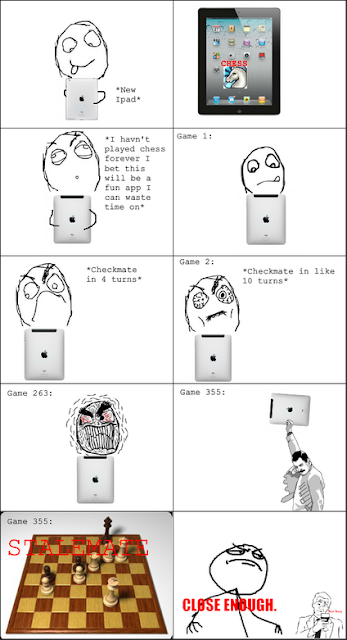 source link (via Reddit)
Posted by rockyrook at 8:45 AM No comments:

If you've been to Ralph's Lost in Chessland blog, have you ever scrolled all the way down?  At the bottom of his blog, he has a footnote ... or rather a Bigfoot Note.

His Bigfoot Note is a summary of his training plan and things he needs to focus on.  I think this is a great idea!

Posted by rockyrook at 7:47 AM No comments:

Another aspect of my chess study that I really need to ramp up is reviewing games by GMs and other top-notch players.

Heisman, in his February 2011 Novice Nook column, provides some insight for choosing books of game collections to study.  I'd like to review Logical Chess Move by Move again and then move on to other books ... specifically the ones he recommends. 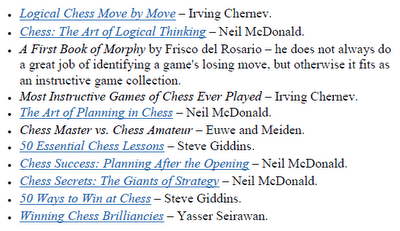 For those of you in Houston ...

As posted on Glenn Wilson's site (http://glennwilson.com/chess/) ... this event is to benefit Larry Englebretson

The Houston Songwriters Association (houstonsongwriters.com) and HoustonOpenMic.com will host a benefit event for Larry Englebretson Sunday, January 29th, 2012. All proceeds will be applied to Mr. Englebretson's short-term living expenses while he convalesces after a serious illness. Mr. Englebreston is an enthusiastic participant in the Houston open mic scene, as it's most frequent acapella performer. He is also the former owner of the Houston Chess Club and was selected as the United States' representative in the senior division of the 2011 World Chess Federation Championship.The event will be held at JP Hops House, 2317 S. Highway 6. Festivities begin at 3:00pm. Attendees will enjoy live bands, a bake sale, silent auction, and chess demonstrations by members of the Houston Chess Club. A prize will be awarded for "best of show" in the bake sale.The silent auction features a wide variety of items to suit any budget. Early donations include musical instruments, music instruction, studio recording services, and an impressive assortment of decorative and miscellaneous items of good value. The silent auction concludes at 7:00pm.Those who cannot attend are encouraged to make online donations at www.houstonopenmic.com/larry.html. A 3rd party donation will be made for every YouTube view of Larry's music video.

The latest news on his condition is posted at the Houston Chess Club under "Coach Larry Updates." Thanks,
Posted by rockyrook at 1:07 PM No comments:

Review of Bobby Fischer Against the World 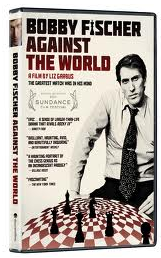 I watched this haunting documentary last night.  There really weren't any shocking revelations in the movie; nothing new that I hadn't heard of before.  What was 'new' for me or unique about this documentary was seeing all the old pictures and film footage of Bobby.  Other than that, I came away from it with just two thoughts.

The first one was the stark contrast of the Individual versus the Machine.  The film did a fantastic job of showing this juggernaut that Soviet chess was.  These guys dominated and they did it collectively and mechanically.

On the other end of the spectrum was this boy ... all by himself ... who without much, if any, family support and encouragement, single-handedly took on the Soviets and defeated them.  That is a fascinating story line.   And it would have been even more amazing had it not been for his delusions, which leads me to the second thought.

His life was so sad.  His mom seemed like a kook.  All he did was play chess - nothing else.  He didn't have any real friends.  When he was detained in Japan, he called his body guard from Iceland.  He hadn't talked to him since 1972!  He had no one else to phone.  I don't know how things were in 1972, but did chess players, who got to that level, have a manager or something?  But even if there were managers or handlers at that time, I'm not sure that even if he had one, that person could have helped Bobby much.  I also wonder how much legal drugs could have helped him.  What could have been ...

If you get the chance to watch it, you won't be disappointed.
Posted by rockyrook at 8:51 AM No comments:

I've been following SOPA and PIPA for a while now.  It is so nice to see major websites shedding some bright light on this proposed set of laws.

There is no doubt in my mind that these are harmful and dangerous proposals.


For my part, I wanted to share a few links so that you can be more informed and take action to stop this act of Congress.

For lots of information about what SOPA and PIPA would and could do as well as more broad information about this push to protect certain interests, read techdirt.  techdirt also links to another site to take action: stopthewall.us.

Drudge is also running a link to the NYTimes that has an article explaining the protest today.

Another blog I regularly read is by Seth Roberts.  More than anything else I've read (except techdirt), this post by Seth Roberts explains perfectly what this whole issue is all about.

Posted by rockyrook at 10:12 AM No comments:

On this date ... Bobby Fischer

While performing some searching today, I found that the DVD for the HBO documentary Bobby Fischer Against the World was released last month.  I've heard nothing but good reviews of it.  I plan to watch it later this week and then I'll post some thoughts on it.

Posted by rockyrook at 9:53 PM No comments:

Feeling pretty confident off my recent win against Trudy, I quickly moved on to the next opponent "above" Trudy in the ladder - Seb.

The dreaded Seb.  I'm 0-2 against him.  In the last two games, I seemed to start off ok, only to be tripped up and promptly mated.  The third time was no charm; I'm 0-3 now against him.

What surprises me is that Trudy seemed so easy to beat.  But Seb seems to go into high gear when the game gets heated and then he just puts the smack-down on me.  It seems that I wouldn't so easily lose to Seb when I so easily won against Trudy.

After a little analysis, I found there were at least a few moves that I should have considered a bit more. 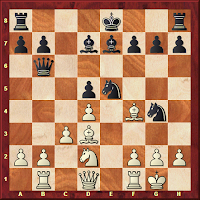 The first position was this one.  He had just taken my night with 13...cxe5.

I played dxe5 ... opening the diagonal between his queen and my king.  I don't know if 14. Bxe5 is any better.  In fact, I'm not too sure this is even that critical of a position.  But I struggled a bit with this one. 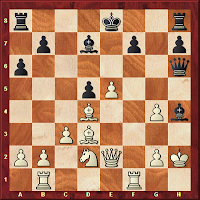 I blundered big time at this point, but upon further examination, I really had no choices whatsoever.  I still fail to see anyway to stop his attack.

I don't think I was playing my best chess when I started this game.  The first hour or so, I was pretty focused, but then I had to pause the game several time when the kids came home from school and we had dinner and other family events going on.  I'd like to try Seb again when I have a full 3 uninterrupted hours against him.  I'm not giving excuses ... I think Seb is a difficult player for me and I don't think I'll ever so easily beat him.  But I'd like a crack at him with full concentration.

After the G/90 game, I played him a G/10.  And this is where I had the thought that he goes in to "high gear" when the game is on the line.  I was soundly beating him; and then he had about 2 minutes on his clock and then he started making killer moves.  Anyway - I need to crack this nut.

Finally - just a quick update on Chess Tempo ... I've managed to stay above 1700 for a full week now.  Although, just today, when I did my 20 tactics, I was served several tactics that were well over 1700 and a few over 1800.  I choked on them big time.  I started off the session over 1730 and ended the session at 1704.  Things just weren't clicking today.  So the slide back down has begun.
Posted by rockyrook at 9:11 PM No comments:

It was another shellacking of a Chessmaster (Grandmaster edition) opponent.  Today I played the "Trudy" personality.  Trudy is rated 1290 and I was rated 1082 going into the game.  We played a G/90.

When I've played these personalities before, I'd kind of go up in the game, only to later fall into some trap and lose.  I've learned to play slow; take my time; and calculate - which is the whole purpose of this 52 game quest.  Trudy dropped 4 pawns before she began to fight.  But by then, I forced her to trade queens and then eventually went up with 2 rooks and a bishop against two bishops and a rook.  I pushed my pawns, queened, exchanged some more and then pulled off the checkmate.

I expect the competition will get stiffer as I move up the ladder in Chessmaster.

Just a real quick accounting update ... before this game, I had played 3 games vs. a Chessmaster opponent.  Then I played 5 games in the US Class Championships.  Over the Thanksgiving break, I played a couple of other Chessmaster personalities, but I don't remember who.  I think I won one of them and lost the other.  So with this game, I've now played 11 and have 41 more to go before August.  I'm hoping to be more consistent with keeping up on the status of this 52-game quest.

As always, my readers and observers are always welcome to play me a G/90 or G/120 on FICS or in person. Just leave a comment and we can work out a date and time.
Posted by rockyrook at 10:04 PM 2 comments: 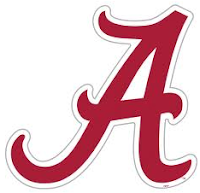 My geometry teacher would often called exceptionally good days "red-letter-days."  Today was a red-letter-day for me.  In fact, it may become the an official RockyRook holiday - to be celebrated from today hence-forth!

After over 17,700 blitz attempts on ChessTempo, for the first time, I crossed the 1700 threshold.  Ok ... I may have crossed it a long, long time ago at some point when my rating deviation was fluctuating like bull-rider, but in recent memory and for as long as I've been consistently solving tactics, I've never crossed this threshold.  I've come oh-so-close before ... flirting with it while getting into the 1690's, but I'd always plummet back down to 1660 or lower.

But today ... I smashed through!  In fact, last week at this time, after I had done my daily 20 problems, I was sitting at 1645.  Then I went on some kind of rampage busting all the way up to 1687 by Sunday.  Monday January 9 was a busy day and I didn't have time at night since we went to a BCS party (way to go Alabama!!) So today, I had to do my 20 for yesterday plus my 20 for today.  I went 36-4 and broke through that glass ceiling and then managed to stay above 1700 for a few problems.  After tonight's session, I'm sitting at 1705. 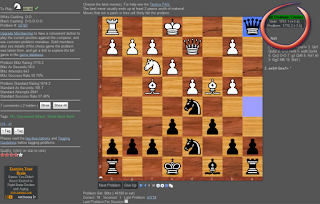 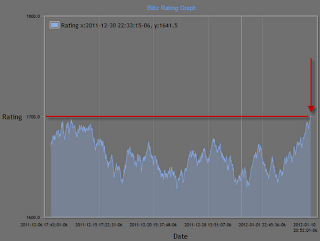 So I got a little curious ... it just seemed to me that this couldn't have been my first time over 1700 (actively speaking) ... and so I bought a Gold Membership to see the full history (I had bought a membership before, but I had let it expire ... I figured it was time to pay up again anyway ... I really love the site).  Sure enough, I was over 1700 a few times.  In fact, the most recent time was just last year ... around the May/June time period.  That must have been several hundred problems ago.

Oh well ... so I get a little enthusiastic about my rating ...

Let's see if I can maintain it above 1700 a bit longer this time.
Posted by rockyrook at 9:37 PM No comments: