more info at bestchessmenever.com
Posted by rockyrook at 2:25 PM 1 comment:

Computer Chess is on Netflix, so I watched it over a few days.

1. It's not really about computer chess.  It's more about AI.
2. The movie starts off as a faux documentary from the early 80's, but then later it shifts to this sci-fi flick about AI.
3. Other topics the movie hit on besides computer chess:  the humanities, sex, the CIA, on-line dating, weird psychology.
4. The movie tries to make you think ... I tried trying to get it, but it was just so weird.  After watching it, I felt like the same way I did when I watched the final few episodes of Battlestar Gallactica - that we are all in this one ginormous loop - robots/computers turning human who make robots/computers who turn into humans who make robot/computers ...
5. I felt closter-phobic the whole movie.  Having been a child of the 80's and staying in some of those old stuffy hotels, I felt like it was stuck in an Elvis Presley look-a-like concert watching this movie.
Posted by rockyrook at 3:26 PM No comments:

Maybe they don't look a lot a-like, but whenever I see a picture of Gareev, I see Dwight Scrute (Rainn Wilson).

If you don't know who Dwight Schrute is ...
link
link
Posted by rockyrook at 8:31 AM No comments:

i discovered a chess player who has taken up a challenge: complete all 3914 lessons on chess mentor within one year.  but not only has he set out on this challenge, he's vowed to donate $2600 to an anti-charity.  this little knight errant quest has a bit more teeth to it than your normal quest.  you can follow this guy's quest on his blog: chess challenge.

you may have heard about the new inductees to the national toy hall of fame.  after all these years, the game of chess was inducted.  the other toy that was inducted this week ... rubber duck.  talk about the opposite ends of the toy spectrum!

gareev is up to 15 now.  he's slowly working his way up to 50 to beat the world record.

oh ... and there is some sort of big chess championship going on: link to site.  go matt damon!
Posted by rockyrook at 2:15 PM No comments: 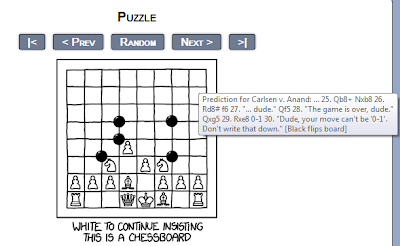 link
Posted by rockyrook at 8:05 AM No comments:

GM Timur Gareev plays 10 inmates blindfolded.  I've seen this guy in person at a couple of tournaments.  He seems odder than your average odd GM.  If you look at the pictures of him playing the inmates, you'll see him wearing an outfit that is really odd.  Also, in one of the pictures, he's facing the players.  Why not just turn him around?

Posted by rockyrook at 3:46 PM No comments: