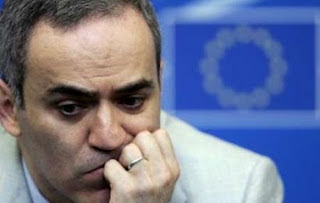 In a recent interview, former chess champion Garry Kasparov says that transitioning his chess skills to politics has been easy.

"In politics, body language is everything. In chess, I found that by strategically placing my hands on my face, I could influence the mind of my opponent."

The chess legend went on to explain the various messages he could send with body language.

"If I put a half-clenched fist under my chin it meant, 'oh, that was a good move, but really quite silly.' Usually this move will cause my opponent to squirm a little." 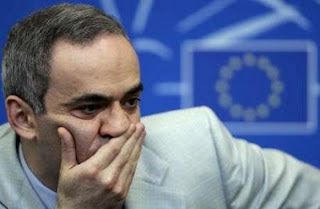 He further explains, "If I want my opponent to piss his pants, then I put my whole hand over my mouth and give him the stare of death. Then I wait for him to resign."
Posted by rockyrook at 9:21 AM No comments:

PHILADELPHIA—In the wake of last month's shocking revelation that actor
Sylvester Stallone had been caught with the illegal human growth hormone Jintropin at an Australian airport, the World Boxing Association, in a joint decision with the Academy of Motion Picture Arts and Sciences and the Screen Actors Guild, has overturned the uplifting, feel-good endings of Rocky II, III, and IV, sources said Monday.

... read the rest of the article.
Posted by rockyrook at 9:09 AM No comments: