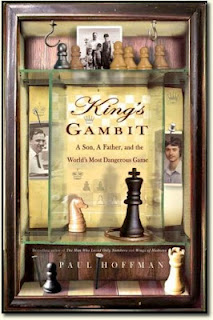 King's Gambit by Paul Hoffman was the best narrative chess book I've read.  This book has tons of interesting stories about the game and the people who play it.  From stories about how GMs try to prepare for games, to hustlers to crazy dictators - it has it all.

In a previous post, I copied a few excerpts about some violent antics by chess players ... these were typical stories from the book.

He also interjects his own story about he and his father - which for long stretches at a time, has nothing to do with chess, but nonetheless is a good read.

The one thing that struck me over and over again as I read, was how easily GMs seemingly blundered.  There were at least half a dozen paragraphs where a GM was explaining the game ... he was ahead, the game was equal, but he made a strong move and would have sealed the win, except for an oversight or an outright blunder.  I kept reading these passages over and over again and I couldn't help but think that blundering is just a part of chess.  Professionals seemingly blunder on a regular basis!  In fact, reading these passages seemed to void up my own resolve to keep at it.  If these exceptional players screw up, then I shouldn't feel so bad about my shortcomings.  Rather, I  just need to keep at it - keep chugging along - to work at minimizing my own screw-ups.  Everyone  messes up.

Other Reviews of the Book

It was a pretty even game until the end.  He had the advantage and was going to win, but made a bad move and subsequently resigned.

I've spent the last week or so reviewing the game.  I gave a few positions to Fritz and those are annotated below as well.

Game 2 is coming up.

In honor of Valentine's Day, I'd like to share a passage from a book I'm reading.  Chess is about passion and desire.  And so when we lose, our emotions tend to spill over.  Sometimes our love for the game turns to violence.

In Paul Hoffman's book The King's Gambit, he mentions some interesting tid-bits about other's desire for the game.

"Defeat in chess is always painful.  William the Conqueror reportedly smashed a chessboard over the Prince of France.  Pascal Charbonneau, the champion of Canada and my closest friend in the chess world, told me how a childhood contemporary broke all the furniture in a hotel room at a tournament and retired from chess.  The Spanish writer Fernando Arrabal once signaled his resignation with a theatricality that surpassed Rossolimo's.  He grabbed his king, climbed up on the chess table, extended his arm horizontally, and dropped the king so that it bombed the board.

"When I was a spectator in 2003 at the annual chess tournament at Foxwoods Casino, where 630 players were battling for a price fund of $93,500, I was nearly struck by a chess clock that an irate loser hurled in my direction.  I'm sure I wasn't the intended target, but I had to duck, and the clock smashed into the wall behind my head and broke into pieces.

"When a player get violent, his wrath is often directed not at spectators or his opponent but at himself.  One contemporary Russian grandmaster has been known to pick up the pointiest chess piece, usually the bishop or knight with a particularly jagged mane, and stab his own head until it bleeds.  Then he rushes out of the tournament hall only to return for the next round as if nothing untoward has happened.  At one event, this grandmaster was among the tournament leaders who were playing on an elevated stage.  When he lost a key game, he bloodied his face and then, in an extreme masochistic flourish, dove off the three-foot high stage, belly-flopping onto the hard floor."
Posted by rockyrook at 2:20 PM No comments:

What caught my attention were a couple of paragraphs in the middle of the article.

"As a professional, Averbakh tried methodically to improve his game by exercising his subconscious mind, and intuition.  'It is very important to raise consciousness when you are working in chess,' he explains."

He then talks about how a relative of his wife told him to "examine Stanislavski's oeuvre" - whatever that means (more info at wikipedia?).  He doesn't expound on what the system does, but in the next paragraph, it seems to allude to the 'happy distraction' idea.

He says, "For instance I was working on some ideas in endings ... I had one problem to solve and I couldn't find the solution.  And when I was not working on this ... I was away somewhere, not over the chessboard, but immediately I found the solution, because my mind was working."

The article continues, "The gap between a strong grandmaster and a world championship candidate is partly a difference in the ability to attain peak performance during the game.  Averbakh thinks this is about more than just study of positions, but it lies in the subconscious churning away while the player is, for instance, walking in a park or sitting in the theater watching a performance."

There is much more in the article and it is a really good read, but those few points really stood out while I was reading it.

The previous article to this one was about a new book out that is about Yuri (link here).
Posted by rockyrook at 6:00 AM No comments:

Since having read How We Decide, I've been checking out Jonah's blog over at Wired.  Last week he posted "How Do We Identify Good Ideas?"

I think his post is highly applicable to chess.  Josh Waitzkin also discussed a similar idea in his book Art of Learning.

In a nutshell ... if you need new ideas (creativity), do some brainstorming and then distract yourself for a bit before returning to the problem at hand.  In chess-speak, when confronted with a critical problem or position, identify your candidate moves.  Once you think you have the one you need, walk away and distract yourself - preferably by doing something that makes you happy.  Then come back to the problem and reassess.

The distraction part allows your subconscious to take over and make connections.  And when you let your subconscious work on the problem a bit, your chances of getting a better result go up.
Posted by rockyrook at 7:31 AM 1 comment: