What a week!  We got back from vacation Monday afternoon.  We had driven 22 straight hours between Sunday morning and Monday morning.  We crashed at a friend's house in Dallas; did some school-shopping Monday afternoon and finally made it back to SE Texas late Monday afternoon.  So I've been trying to catch up on sleep all week long.  Work was a killer this week - lots of fires to put out.  Then our AC unit decided to quit; so we had a big chunk of it replaced.  Glad this week is in the books!

But I'm determined to keep this chess quest up.  I did get up one morning this week to read over Logical Chess. I also manged to get 20 tactics in this week on ChessTempo.  Then this morning, I struggled to get out of bed to play my G/90 game.  I rolled out at around 6:30am and decided to play Seb again (Chessmaster).  I played with Black this time.

So the good news is this:
1. I actually played and finished the 2nd game.
2. I used most of my clock - I had about 6 minutes left when the game finished.
3. I got to move 28 (rather than move 15) before screwing up.

So move 28 was where the wheels came off.  Here is the position: 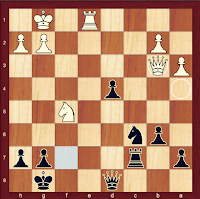 Seb just checked me with his queen.  I had Kf7, Kh8 or Rf7.  I played Rf7 thinking I could get the rook more involved with a counterattack.  Kh8 felt like I was painting my king into a corner.  Kf7 felt like the king would be more exposed.

But again - my tactics antennae failed me.  I failed to see Nd7 and with the queen pinning the rook, there was no hope.

The good thing about playing Seb is he punishes me for these types of mistakes - which is exactly what I need - I need to be able to spot these.

Going back a few moves before this one, I had pushed the d-pawn.  This opened up this very diagonal, which of course in this position burned me.

It's tough trying to nail down everything at once.  Chess is kind of like trying to stop 5 leaks with just 2 hands. You stop one leak, another crops ups.  You gotta keep an eye on everything.

So after going 0-2 against Seb, I'll probably be playing the next lower rated player in Chessmaster (if I can't find someone on-line to play against next week).

One other thing - one nice feature of CM is the ability to pause the game.  My kids and wife are always interrupting me later in the game.  Today, I just paused it, addressed the family issue and then came back to the game when I had some time.  Not exactly the best scenario to play chess, but you do what you can :-)
Posted by rockyrook at 3:13 PM 1 comment:

At Least it's a Start
I sent out a seek on FICS this morning, but got no takers for a G/90.  So I fired up Chessmaster and played the Seb personality.  A sub-goal, now, is to raise my embarrassing CM rating ... after my lost to Seb this morning, I'm at 898.

I still need to work on taking more time and looking at all variations.  I got burned this morning for not seeing a fork.  Also, as a TL team member told me, I need to play more defensive chess.  In other words, I need to improve at looking for tactics against me and not just be looking for tactics to score against my opponent.

The other key mistake I made was in the opening ... another theme of my mistakes.  After 1. d4 Nf6 2. Nf3 e6 3. Bg5 c5 I decided to move 4. c4?  It really makes no sense now that I look at it.  The only reason I can think of about why I made this move was because of a game I was reading in Logical Chess Move by Move ... it had seemed to me the c2 pawn should have been on c4.  Even that doesn't make much sense because the move sequence in the book was different.

Anyway, the correct 4th move should have been e3 or e4.

Developing the Habit
Next steps now ... I need to return and play another game.  I need to get this weekly habit going.  Unfortunately, we are leaving on a family vacation for the next week and a half and I won't have a chance to play until the week of August 22.  The good news is that my schedule is fairly clear from August 22 to the end of the year and therefore nothing should trip me up on trying to form this habit.
Posted by rockyrook at 1:05 PM 1 comment:

We finally have a place to meet and play on the NE side.

Check it out: Lake Houston Chess Club; meets Tuesdays at 7pm at Panera Bread on 1960.
Posted by rockyrook at 10:35 AM No comments: