I'm still chugging along at ChessTempo and I'm getting close to finishing Logical Chess Move by Move. I've not had much time to play, but that will all change here in the next few months.

I've been transferred to a new job. For the next two to three months I'll be caught up in work transition and relocating, so chess will take a backburner for a little while. But once we get settled in, I'll be on a normal work schedule (as opposed to shift work - hallelujah!) and I'll be able to more regularly play chess (via the 45 45 tournament). Also, I'd like to actually join a real live chess club, once we settle in to our new home, and play there once a week or so.

In the mean time, I'll continue to hang out at ChessTempo (almost up to 5000 tactics) and try to finish Logical Chess.
Posted by rockyrook at 3:52 PM 2 comments: 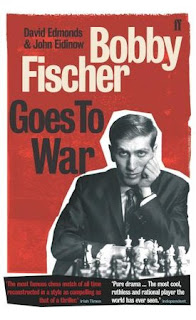 Halfprice Books is a favorite stop when Jill and I go on dates. The one section that I visit first and every time is the chess section. I've found some good books there before. The last time we went, I found two books that I had seen before but never purchased. Since I have really jumped into chess recently, I decided I needed something to read that was chess related but not of the study type. So I bought Bobby Fischer Goes to War and The Chess Artist.

Bobby Fischer Goes to War was a little tough to get into and to finish. I didn't really like the style of the authors. Perhaps since it was written by two authors, their two styles might have muddled things a bit.

The most interesting thing I found as I read this book was the fact that I seemed to be pulling for Spassky while reading it. Of course I knew Fischer won, but if what the authors described of Spassky is true, I think I would have pulled for Spassky. Fischer seemed to be such a pompous, self-conceited individual while Spassky seemed humble and level-headed. I really felt sorry for Spassky and all that he had to put up with in that championship match. He was really squeezed between a rock and a hard place (Fischer and the Communists).

Another thing I found fascinating, which I didn't know before, was how dominating Fischer was in the preceding tournaments before the championship including his 6-0 thrashing of Mark Taimanov and 6-0 drubbing of Brent Larsen. That just boggles the mind.

Several other sites have read and reviewed this book. Also, I've seen a few links that suggest this book will be made into a movie to be released in 2010.

Review at jeremysilman.com
Review at npr.org
Review at NYTimes.com
Review by Ken Owen
Review at chessville.com
Posted by rockyrook at 4:18 PM No comments:

(not) Memorizing the Board

Reading through my feeder this morning, I saw two big bloggers blog about the (roughly) same topic - board visulization.

Tempo blogged about some other player's method for memorizing the board. Then he tried to solve a Polgar brick puzzle by looking at a blank board. He was just curious. In the comments he sums up the same sentiment BDK has with regard to memorizing the board:

board vision in itself is only interesting if you want to play without a board. Which I don't. In a real game there is a real board, so there is no need for perfectboard vision. (allthough it is fun in itself)

I'm probably never going to memorize the board proactively. If I memorize it as a result of looking at the board so much, so be it, but I'm not going to take the time to memorize it. I think at my level, there are far too many other tasks I can focus on right now that will give me a better ROI than memorizing squares.
Posted by rockyrook at 7:54 AM 5 comments:

Be sure to check out the "logo booty shorts" under the shop section.

Let's just say I didn't find any links to chess clubs when I went to this site.
Posted by rockyrook at 3:45 PM No comments: 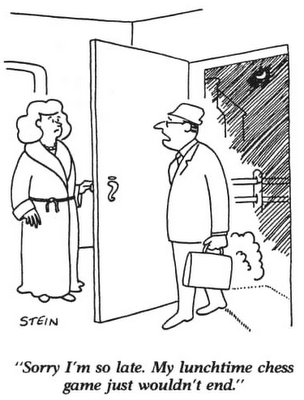 Posted by rockyrook at 3:29 PM No comments: