Just when I thought chess could not get any more novel, it does.


Check out straightupchess.com The basic idea behind these boards is to make chess more artful by making the game into a piece of art ... hanging the game on the wall if you will. Very clever.

I wonder when the next leap will be ... LCD touch-screens with a chess board and pieces ... connected to FICS, ICC or wherever. I think I saw a commercial or maybe it was Bill Gates' home ... a coffee table that has a computer integrated into it. I seem to remember seeing people play chess on it. 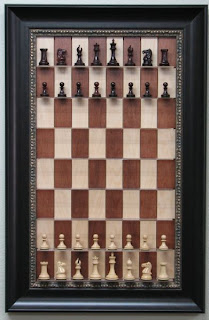 Blitz Rating at FICS this Month

My blitz rating is mimicking the stock market. It goes up a little, but just keeps dropping even lower. I thought I'd get that off my chest.
Posted by rockyrook at 10:47 PM 3 comments:

Tis the season when every sports writer in America breaks out the chess comparisons. Every year, MLB writers compare baseball matchups to chess. During the summer, it's not so bad. But during the playoffs, every, single writeup has at least one reference to chess.
Now with football in full swing, comparisons are being made between linebackers and quarterbacks. This week it was Ray Lewis vs. Peyton Manning.
To add on top of these is the US Presidential election. And we all know that somewhere in a political contest, there has to be at least some reference to chess. This political chess comparison is actually pretty good. The writer seems to have the good sense to take the comparison one step further by actually explaining the comparison of John McCain to an amateur chess player. Most writers will simply say, "it's a chess match" and leave it at that. 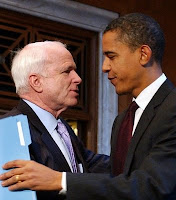 And then there is this article that classifies the two candidates into classic and hypermodern types. He dubs McCain a "classic 'Romantic-era' player" comparing him to Captain Evans. On the other hand, the author tags Obama as a "Hypermodern positional player" who is "an analytic who prefers big ideas to short-term tactics."
I really don't mind the comparisons. I enjoy the ones that go into the details. But the ones that make the broad-stroke comparisons aren't really that great. Everything is like chess in one way or another. But to put some thought behind the comparison is what makes the comparison truly worthy.
Posted by rockyrook at 8:31 AM 3 comments: