Still Need to Learn My Lesson

Serves me right for drawing.  What makes it more painful is that I knew I needed to slow down - the time pressure was all in my head.  Had I simply got up, walked out, breathed deeply and took my time to assess the position, I would have won (most likely).  Instead, I rushed into it and didn't even consider the perpetual check or even the loss.  I was still lucky to even get a draw out of it after my failure to take time to assess.

Anyway, here it is; and here is the key position (at least for me): 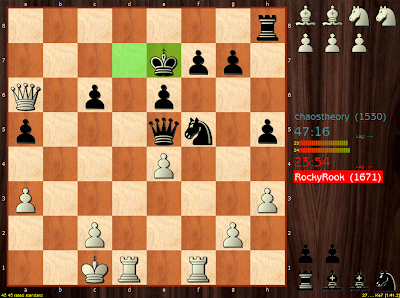 I've included in the screenshot the time left on our clocks.

It took me two days to finally come back to this game and look at this position - it was really burning me up inside.

...Kf6 ... the knight is pinned and I my queen is on the right diagonal to defend against the black queen check.  My pawn is then free to capture the knight and I'm up a full rook.

What puts a burr up my butt is my failure to even analyze the perpetual check and potential loss - instead I succumbed to the perceived time pressure and went with the immediate knight capture.

I know how to not be rattled.  I've got to learn how to recognize when I'm being rattled.  From there, I can just right the ship.
Posted by rockyrook at 8:49 AM 1 comment:

I am constantly surprised, when talking on-line chess with people, how many haven't heard of FICS or BabasChess - one of the many clients that interfaces with FICS.  In the next few posts, I'll discuss setting up BabasChess to look like Fritz and then how to log onto to FICS and issue simple commands.  For me, having a nice interface really enhances the on-line playing experience.

A number of years ago, I found someone who was able to configure BabasChess to look like Fritz' board.  I really liked that setup.  I've had my set up the same ever since.

Step 5:
Click on the 'Preferences' button in BabasChess (or hit F11) and configure the board settings as per the screen shot below 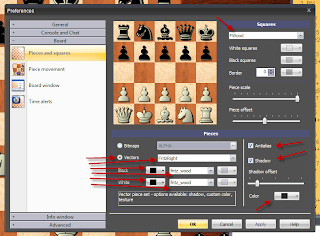 The first screen shot is Fritz while the second is BabasChess configured to look like Fritz. 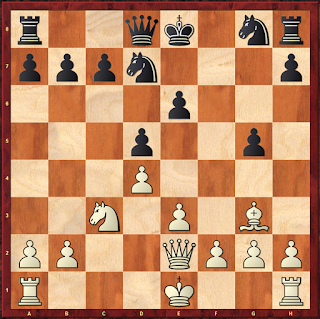 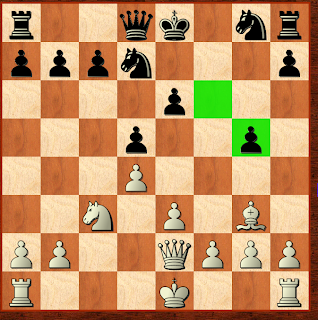 Final Thoughts on US Class Championship

The last time I played in an OTB tournament, I was in 6th grade.  The tournament was a lunch-time event involving a handful of students.  I won that tournament.  This tournament was essentially my first real-live chess event I've ever participated in.  To say the least, it was fascinating.

It amazes me that in all my interactions with so many people in my neighborhood, church, work and school that I don't regularly find serious chess players.  I mean, chess is a very popular game and has a huge following, but I've never found that one friend who will stay up til midnight playing chess with you.  When we moved to Houston, I began in earnest to ask more often if people actively played chess.  Miraculously, I've been able to find a couple of gentleman who play.  One goes to my church and the other I met at at chess meetup.

Then I go to this tournament and it's as if I've finally found the party after searching all these years.  The best thing I liked about the tournament was simply talking to others about the game - knowing that there are other people like me who have the same crazy delusions about getting better at this game.  Getting the prize money wasn't the most valuable thing I got - rather it was the experience of the event ... one that I'll never forget the rest of my life.  It was exchanging contact info with other people and meeting fellow chess bloggers.

I was a little apprehensive about the tournament at first, but now all that anxiety is gone and I'm planning which tournament I want to sign up for next.  This addiction has gone to the next level.
Posted by rockyrook at 10:15 PM 3 comments:

The 4th and 5th rounds were much better than the 2nd and 3rd.  After doing some calculating, I figured if I won both games and the gentleman who I drew with either loses or draws a game, then I'd earn 2nd place and $100.

The 9:30am game began.  Us unrated folk are sitting in the back of the hall - having to endure people constantly walking in and out of the hall (we were right by the doors).  We also had to deal with all the traffic that was getting water (we were right by the cups and water).  About 2 or 3 times during the game, the waiter would push his cart full of water into the hall and then dump all the ice water into the water dispensers - it was very loud.

So about 15 or 20 minutes into the game, I notice the kid next to me jumping up and down, moving around a lot, going back and forth between his board and his dad who was sitting in the back of the hall with his laptop - you know where this is going.  I kept an eye on the dad.  I couldn't see what was on his screen, but I am curious because the kid is constantly going back and forth.  A few more minutes pass and I notice the dad has now turned sideways - and plain as the noon day sun, I saw a computer board on the laptop screen!  I immediately went to the director and told her what I saw.  She promptly came over, made the dad shut the computer down.  Right when the dad was closing the lid on the laptop, the kid walks over and with a shocked look on his face, raised his hands as if to say "what?"  The director then told the kid that outside help was not allowed.

Now up to this point, the kid and the gentleman who he was playing were even.  After the computer was shut down, the gentleman won easily and quickly.

After the round, I told my fellow unrated players what happened and we were all angry to put it mildly.  We just couldn't believe in the unrated sections of all sections that cheating was going on.

I won my round 4 game and then had all morning and afternoon to think about round 5 and my next opponent who I had just caught cheating.  That's right - I was playing the kid next.  Two of the other unrated players and I discussed the next round quite a bit - especially what I would do if this kid was bouncing up and down during the match.

The time came for round 5 and the kid and the dad were all ready to go.  I sat down, looked behind me and noticed the dad was also taking notation of the game - great!  So the rest of us kept a sharp eye on the kid to see what he would do.  The first time he got up to walk over to his dad, I stopped looking at the board and deliberately followed him with my eyes.  Sure enough, he was going to his dad.  I decided that if he did that again, I'd stand up and actually follow the kid.  But he actually stayed put the rest of the game.  He made his moves in under a minute every time.  I took my time and made sure not to blunder.  Twenty-six moves later, I had him check-mated.  Again, I was the last one to finish my game - the other two games had ended quickly. A few minutes later, I mated the kid - all the unrated section was done in a matter of 20 minutes.

The cherry on the top ... the gentleman I was tied with lost his final game, which gave me sole possession of 2nd place and a hundred bucks!

I hung out in the hall observing other games for the next 90 minutes.  Then when I had had enough, I packed up and went home.  Then that same night, I played my first game of the new season in the team league and I won that game as well (click here and here for the game - there was a disconnect during the game, therefore there are two parts to the game).  3-0 in one day and a hundred bucks - not a bad day at chess at all.

I'll post some additional thoughts and comments on the tournament tomorrow.
Posted by rockyrook at 11:01 PM 2 comments:

I lost round 2.  It went 60 moves.  But ultimately it was me not seeing the knight fork after his rook sacrifice.  I'll post the games later after I load them in pgn.

The 2nd game was also 60 moves and resulted in a draw.  There were some very crucial positions and a lot of calculation involved on both sides.  I was up two pawns at one point, but then was just up a pawn with two pawns on the g and h files to his one and one pawn on the a file to his one.  He had a white-square bishop and I a knight.  I'm sure there was a win there somewhere, but 1) I suck at endgames and 2) I suck at endgames.  Anyway - he offered a draw, but I told him I'd prefer to play it out - heck, we're paying to play right?

Regardless - it was fun and I'm looking forward to rounds 4 and 5 today.

Donnie is cleaning house!  Good luck to him today.  Ivan had an interesting ending last night - after my game was over, I watched the end of his.  He won after his opponent's flag fell.

We had our picture taken ... Ivan's posted it here.

Posted by rockyrook at 8:14 AM No comments:

Round 1 US Class Championships (Unrated Section)

Here it is - my first official USCF over-the-board game - and it's a win to boot!  I played with Black and I put my own annotations in. I'll run it through Fritz later to see how many missed opportunities my opponent and I had.

This was the longest time-controlled game I've played (120 mins).

Also, I got to meet two fellow bloggers: Ivan and Donnie.  Both of them won their games too.
Posted by rockyrook at 7:51 AM 1 comment: