When to Play Your Best Chess

I just read Scott Adams' post "Like a Night Watchman" in which he talks about how he feels words and how he needs to be in the right frame of mind before he can write.

He wrote, "People often ask how I get into the writing frame of mind. To me, it feels like being the night watchman in a museum. My job is to make sure all the doors are locked, and the blinds are pulled, and the lights are out. As a writer, you need to shut out all of the distractions from your other senses. I make sure I'm not hungry, tired, uncomfortable, or listening to anything. Then, like the night watchman, I go room by room with my flashlight until something scares me, surprises me, or makes me laugh. I have to feel something. And when I do, that's the part I keep. Then I wrap up the inspiring words in ordinary words, to form sentences. That part is more craft than art.

"Writers tend to work early in the morning, or late at night, when brains are naturally able to focus deeply on one thought. In the middle of the day, distractions are unavoidable. I wonder if anything worthwhile has ever been written in the afternoon."

Although I don't want it to be that way, I admit that I am this way when it comes to chess ... I have to be in the right frame of mind before I can play really good chess.  If I'm too distracted or have something else on my mind (work, family, other pressing needs) then good chess play takes a back seat.  I'd rather be able to play good chess anytime, anywhere ... that's where I'd like to be.  But as it stands, my best chess is played at night with the kids in bed and my wife watching American Idol or whatever it is she likes to watch on TV and me sitting at the computer in a quiet room.
Posted by rockyrook at 4:33 PM 2 comments:

Susan Polgar had a Chess Trivia on her blog today.  I thought I was looking at a young George W. Bush when in fact it was Andor Lilienthal.

Posted by rockyrook at 9:32 AM No comments:

It was going pretty well, I thought, until his queen came down and picked off those two pawns.  After he picked off the first one, the air out of my ambition just went out and I pretty much lost the will to continue.  I kept trying to prep for that kingside attack on h7, but it never really materialized for me.

Oh well, it was still fun kept me entertained for most of the two hours.

Here's the game with all the observers' comments.

I let Fritz analyze the game all day today ...

He pointed out a missed tactic that would have really helped me along.  I actually considered the move, but felt that Bf8 neutralized the check ... if I would have looked one extra ply, I would won a rook. 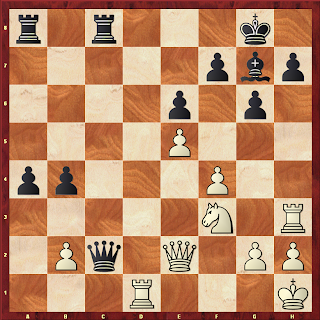 Posted by rockyrook at 10:24 AM No comments:

Maybe this is nothing new, but it's still fascinating.

Here are the links to read:

Consider this passage from Jonah's article,

This is a truism of expertise. Although we tend to think of experts as being weighted down by information, their intelligence dependent on a vast set of facts, experts are actually profoundly intuitive. When experts evaluate a situation, they don't systematically compare all the available options or consciously analyze the relevant information. Carlsen, for instance, doesn't compute the probabilities of winning if he moves his rook to the left rather than the right. Instead, experts naturally depend on the emotions generated by their experience. Their prediction errors - all those mistakes they made in the past - have been translated into useful knowledge, which allows them to tap into a set of accurate feelings they can't begin to explain. Neils Bohr said it best: an expert is "a person who has made all the mistakes that can be made in a very narrow field."

So it sounds like intuition is "emotions generated by experience."

Also, I really like that definition of an expert; "a person who has made all the mistakes that can be made in a very narrow field."

Carlsen developed his intuition by deliberatly practicing against computer programs all those years (at least 10 years?) and learning from his mistakes.

To me, it sounds like the best bang for your buck at getting better at chess is to play against computers or stronger-than-you players, deliberately, often (as much as you can) and to learn from the mistakes you made.

Moll's article goes on to state, "Still, mere exposure to more positions is not the same as being able to use them in a sensible way. The idea that working with computers can influence intuition is similar to the idea that the internet may be changing the way we think."

He quotes a neuroscientist who says, "Assembling a new combination (”associations”) may be relatively easy. The problem is whether the parts hang together, whether they cohere. We get a nightly reminder of an incoherent thought process from our dreams, which are full of people, places, and occasions that do not hang together very well. Awake, an incoherent collection is what we often start with, with the mind’s back office shaping it up into the coherent version that we finally become aware of — and occasionally speak aloud. Without such intellectual constructs, there is, William James said a century ago, only “a bloomin’ buzzin’ confusion.”

By the way, Jonah Leher's book How We Decide looks very intriguing.  I'm going to look for this the next time I'm in the bookstore.
Posted by rockyrook at 3:22 PM 1 comment:

Classic Posts on One Moves and Planning

There are three chess posts sitting in my RSS reader that I have saved for several months.  I saved them because I really like them.  What's interesting is that they were each written in different years (2007, 2008, 2009), they are all related and they pretty much have the same point ... looking deep into a position is futile; so don't do it.

"The truth is that when we understand the position we see clearly, we do not overlook things, we do not make mistakes. It is when the position is beyond our comprehension that mistakes become easy. It is no longer easy to distinguish between moves. There is no way for us to tell how to proceed because our knowledge of this particular imbalance is limited." - drunknknite

"I have been thinking a lot about planning of late, especially with regard to its connection with intuition and minimalism. ... The more elaborate a plan, the more there is to go wrong at every stage of its realisation. And this is without considering the role of the opposition, whose goal is not just to refute various plans but to lie in wait for the obvious ones, constructing his game to meet them most effectively.  So should one actually have a ‘plan’ as such, or is the entire concept flawed? I’d say it needs some adjustment in that a ‘plan’ must have enough inherent flexibility to change at any moment. And what characterises the game of strong players is the way that their moves often seem ‘multi-purpose’, fulfilling a role in multiple potential plans." - Nigel Davies

My oversimplified suggestion (and by no means is this an expert or professional opinion) is that plans should be discouraged (thinking beyond 2 ply) and that time should be spent trying to understand the current position on the board and then finding the best move that improves your position.

Anway, go read those three posts.  They are worth the time and effort.
Posted by rockyrook at 1:11 PM 1 comment: 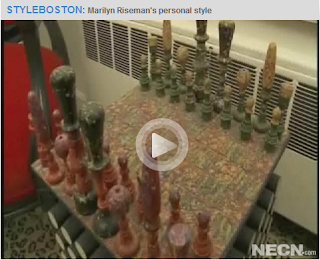 Here's a screen shot from a video (found here) about one of Marilyn Riseman's favorite pieces of art - a chess set entitled "Mental Block". 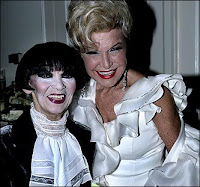 Of course after finding this picture of her (she's the one on the left), I wondered if she had a mental block when she decided dress like that for her 80th birthday party.

(photo credit: http://www.boston.com/yourlife/fashion/gallery/0816_stylespy/)
Posted by rockyrook at 2:28 PM No comments: 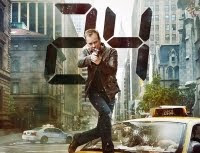 Not sure if anyone else out there watches '24', but I just read here that Mary Lynn Rajskub says Kiefer Sutherland (Jack Bauer) "loves playing chess and spends time in the game whenever he can manage."  And if you ever beat him, he'll break your knees.  OK ... that last part I just added.

Anyway, even though the show seems pretty predictable now, I still enjoy watching it.
Posted by rockyrook at 12:28 PM No comments:

Whew!  It is good to be back playing in the 45 45 league.  I always get so dang nervous playing these games.  I was wiping my sweaty hands all through the game.  I put on some Ludovico Einaudi and David Darling to help me relax.  It may have helped.

Here is the game on the FICS Game DB.  You can also see the game here along with the whispers of those who watched it.

After I played 11. b3, he sent me a chat saying "Nxd5 was better"  Of course he was right ... and it really threw me off ... rattled my nerves even more!  But I was able to fend him off and only lose a pawn and then go on to win a bishop, trade queens and then trade my bishop for his rook ... then he resigned.

So now Fritz will do his work tonight and then I'll digest this one for the next few days.
Posted by rockyrook at 9:43 PM 1 comment:

Simply amazing.  While perusing the chess news this afternoon, I found another article about a chess game gone wrong.  You can read the news brief here.

Let's calm down out there folks.  If you feel the need for violence and chess, consider chess boxing.
Posted by rockyrook at 4:14 PM No comments:

Here's another story of a chess game getting out of hand.  Sounds like there was money involved in this incident.  The guy that was stabbed did not die, but was in critical condition and needed surgery to fully recover.
Posted by rockyrook at 1:18 PM 1 comment: