Patrons, baristas and even the owner of Lazy Daze coffee house in Indianapolis claims there is a ghost who haunts the place and even plays chess.  The claim about the ghost playing chess comes from the owner who said, "One morning I was opening up the coffee house, getting the place ready and straightened up for business," [Jeff] Coppinger tells Asylum. "I put the chess pieces on to the playing table and then went to the back room for a little bit. I came back to the front office and noticed that all the chess pieces had moved."

OK ... I'd bite.  If I lived there, I would visit the place after reading this story.  I'd even get the pieces out and wait for the "ghost" to move them while I sipped on some cocoa.

via Our Lady of Lourdes Chess Club
image credit Earl McCall at redbubble.com
Posted by rockyrook at 10:03 AM 1 comment:

So I was messing around at ficsgames.com and found that you can request for games to be annotated.  What I did was search on my handle, clicked on a specific game and then clicked the 'annotate' button.  A message pops up saying a request has been made and that in a few minutes the annotated game would be available.  Sure enough, I hit refresh on the browser and the game was annotated.  Pretty neat for a quick and dirty analysis of a game.

Here is the game I had annotated.

And since I'm a glutton for punishment, I've linked to all my FICS games (for all my potential competitors to see).  You can find the link under "ROCKY ROOK GAMES" to the right.
Posted by rockyrook at 2:15 PM No comments:

A Chess Set for all the Knights Errant

Hurry and place your bids today!  There is a unique Don Quixote chess set on eBay right now.  At the time of this posting, the bidding ends in about 5 hours. 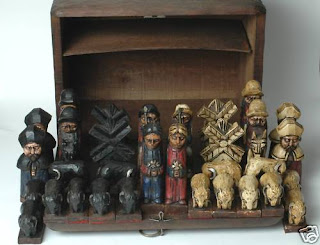 The world of creative chess sets and the old Knights Errant collide in spectacular fashion in this antique chess set.

A snippet from the auction details reads,

"What we do know:
The oral history of the set: This set was purchased 1988/1989 from a woman who told me her Grandfather brought it back from Spain. He was stationed in Spain both during and immediately after World War 2. She said the pieces were displayed in a curio cabinet for many years until the Grandfather died in the late 1960's. After his death, the set was put back into it's case and stored. We used it several times a year (total probably around 100 times), returning it to it's case after use. We have not used it since about 2002.

What we do not know:
The actual age of the set, the manufacturer or the type of wood used. The back of the board is stamped GENUINE LEATHER MADE IN SPAIN JEYPE. Since the stamp is in English, we feel that it was probably made for export, so there may be some doubt as to it being purchased in Spain. Our research indicates Jeype is a leather maker, which sheds no light on who made the set or who carved the pieces."

I found a neat site (called old-picture.com) a few years ago and saved the link to it.  I went back to the site today and did a search on chess and a couple of images were returned.  Here is a direct link to the first picture.  From the site, it says this picture was taken in 1899. 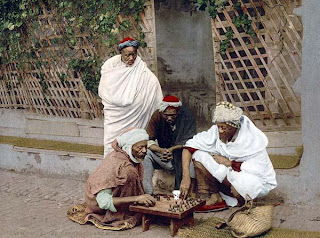 The second picture is of Capablanca. 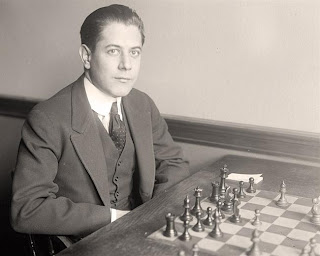 Posted by rockyrook at 10:05 AM No comments:

We're into the 4th round.  This was my third game.  Here is a link to all the whispers made.  I need to start whispering in my game so as to record my thoughts and such.

It's not an exciting win, but it is a win nevertheless.  Fritz is working it right now ... we'll see how many tactics I missed this time.
Posted by rockyrook at 10:45 PM No comments:

Inspired by Farbror who posted his January chess stats, I thought I'd start doing the same. 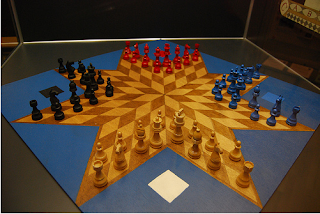 This set sports the fancy "star" design of the board.  It looks like you can get a more "normal" looking 4-way chess board here.
Posted by rockyrook at 12:24 PM 3 comments: