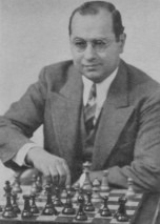 I have finally completed reading Logical Chess: Move by Move by Irving Chernev.

This little project of mine has been going on years and it finally came to an end on the evening of Friday October 21, 2011.  I can't recall when I received my copy of the book ... it must have been around 2003 as a Christmas present.  I wanted it, because, back then, it was the book to have if you were aspiring to improve your chess.

At about this same time, I heard about the Polgar Brick and the subsequently how a few old Chessville denizens worked on that "project".  I missed out on the project and therefore was reduced to scouring the Internet for that .pgn file.

So to tie these two thoughts together - when I received my copy of Logical Chess, I decided to make a "project" out of it.  I would work on it game by game - page by page.  Sometimes I would spend a lot of time on one game, other times I would blow through a game fairly quickly.  Then there came a time when I abandoned it altogether ... only to just pick up the book and read over the games, but not work on the project.

Then the desire came back ... I just had to finish it.  Granted, it may not be perfect, but in my opinion this book is one of those timeless books and it felt better to have it all in one file.

My future plans for this book include additional review.  I've done some of the variations, but not all of them.  As I have more time to really dive into the games, I'll add the variations.  But for now, it is in a form I've always wanted it in.

Rules for Entering Class Divisions in a USCF Tournament

This question if for all you USCF TDs and frequent tournament players.

Why could these three players enter a class division from 1400-1599 when they had a rating higher than 1599?


After a long day of work, I drove down to Hobby Airport at the Hilton.  A cold front finally moved through South Texas and the weather was perfect in every sense of the word.  It was a great night to watch a football game and look at the stars.  But I had other things on my mind - the Class C section.  Round 1 for the 3-day was that night.

Like last year, the accommodations were nice.  The Friday night round was quiet as usual as only about half show up while the other half prefer to start round 1 on Saturday morning.

Round 1
The G/120 game started at 8:00pm.  For me, it lasted well past midnight. I played an older gentleman who was a little late for the start.  I started the clock and then he showed up a few minutes later.

I didn't get off to a great start and was quite rusty.  My pawn structure was all awry and he took full advantage of it.  I went down a pawn very early.  Later in the game, he left a pawn en prise and I returned the favor by not taking it (smack to the head!).  After I made my move, I realized I should have taken the pawn.  Then my whits really started failing me.  I held on for a few more moves only to commit an outright blunder by leaving my rook undefended.  I immediately resigned.  He was very cordial and reviewed the game with me for the next 45 minutes.  In the course of talking to him, it was apparent he had a lot of knowledge of the game.  He said he was retired and that was all he does anymore - study and play chess for several hours each day.  He seemed like the person that might win the Class C tournament.


Round 2
I tried to get some sleep after that tough loss.  I didn't get much.  I woke the next day, went on a walk in the crisp morning air, returned, mowed the lawn and then watched some football on TV.  I headed back to Hobby around noon to start round 2 at 1:00pm.

My next opponent was a kid who is in 6th grade.  My opening was much better than the day before.  I was black and played the KID.  After speaking with my opponent the previous night, he told me a bit about the plans of the KID ... it was useful for me since I know nothing of openings.  Like I said, I developed well and castled early, kept developing and then was able to get his bishop for one of my pawns.  He didn't castle, and instead swung both rooks over to my kingside to try a full-on attack.  But was able to hold it off and I then proceeded to drive his pieces back to where they came from.

We traded a few pieces, he attacked, then I counterattacked and then be blundered.  He thought he could check me and capture my rook, but he failed to see that my queen was defending h8.  But by this time, my clock was down to two minutes.  So I quickly promoted and mated him.

Round 3
After I won my first game, I got away from the place and ate some dinner - a nice sirloin steak - and watched some more football and baseball.  I went back to Hobby feeling pretty good.

My third game was tough and I felt I should have lost it.  I played white and opened with the Torre.  He then captured my bishop and then I had doubled pawns.  It wasn't looking too good.  I held on for dear life.  He placed his rook on the back rank, pinning my bishop to my king, then he followed up with his queen at c4, defending the rook.  I was on the verge of being mated.  And then he blundered.  He took a pawn with his bishop, thinking it was only defended by my queen.  Had I taken the bishop with my queen, it would have been mate by queen and rook.  But he failed to see my rook defending the pawn and he lost his bishop.  I took the bishop, the played 29. Rc3 and again, he failed to see that he had to recapture with his queen.  Instead he captured with the rook and I took his queen and he resigned.  I dodged a bullet.

So I went home Saturday night with two wins under my belt!  I didn't feel deserving of both of them, but I took them all the same.


Round 4
I drove to Hobby again feeling anxious.  My unspoken goal was to get three wins, and I wanted to win round 4 and then still have round 5 for a shot at earning some prize money.

I played with black and played some opening ... not even sure if it exists.  Chessbase calls it the Bishop's Opening (C24).  Like round 2, I ended up pushing this guys pieces back-back-back-back.  But I also ended up with doubled-pawns again!  After played 25...h4, the push was complete when he stuffed his queen in the corner.  All my pieces were aiming in the right spots.  I moved my rooks up more, swung my queen over to h8 and then he crumbled.  He ended up checking me with 34. Nd6+, I captured and then his queen came and cleaned up a few pawns after checking me on c6.  But I got my king all safe and my pieces were still trained on his king.  I mated him in 41 moves.  I had won 3 games!

Round 5
I cannot lie - I was feeling really good.  The only way I can describe it is how Harry Potter must have felt after taking that "feel-lucky" potion.  I just felt I could do no wrong.  My confidence was to the point of brewing over - border-lining on genuine hubris!  I failed to mention earlier, that I was the lower-rated player in all these games coming in at 1434.

I played with white in the last round.  I was relaxed, confident and feeling really good.  It was another older gentlemen - no doubt retired.  I played, again, what I assumed is the Torre.  He ended up pushing his pawns on the queenside - I thought he was pushing them a bit prematurely.  After it was all said and done, I ended up with a pawn chain from f2 to c5 - and this chain would be his un-doing.  Once I had that spearhead firmly in place, I proceeded to plant my bishop and knight deep in his territory.  We did some exchanging after which I was up a pawn.  We did some moving around and wrangling, but with each move, my position was getting stronger until I had a death-grip and he had nothing.  I felt kind of bad for him ... every time I moved, he would shake his head, sigh and then shake his head again.  My d-pawn eventually broke free and it was over.  I scored 4.0/5.0!!!

So I stayed around, snapped some pictures and watched the remaining Class C games.  I had a shot at some prize money.  I strolled around a bit too.  Over the weekend, I noticed a few families that were playing.  On Sunday, they were all wearing New Orleans Saints shirts.  So I asked one of the dads what the deal was.  He explained to me that there were 4 families who all lived next to each other and their kids went to the same school.  They all love and play chess - including the parents.  I thought that that was so cool - a real dream of mine!

Finally the games in Class C finished and they put up the final results.  I came in "4th" and scored $150!  I checked the tournament results tonight and my rating went from 1434 to 1617!  Indeed, it was a great weekend.
Posted by rockyrook at 10:11 PM 3 comments: