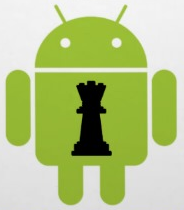 LATEST ADDITIONS
ChessOcr
Amazing app!  If you want to analyze a position you are reading from a book or magazine, this app snaps a picture of the position and then loads it into your chess analysis app.  ChessOcr on Google Play.

ChessTempo Mobile
The best tactics site (in my opinion) got better with the introduction of the mobile version.  It's not really an app per se, rather just a web site that aligns better on a mobile device.  Check it out at chesstempo.com/mobile.

SEPTEMBER 13, 2013 UPDATE
In addition to the original post, I wanted to keep adding as I find other apps I really enjoy.

Chess.Com App
The number one Android chess app I use is Chess.Com's app.  The app is stable; graphically nice and fairly easy to use.  The biggest thing I like about the app (and Chess.Com in general) is that is has pretty much everything I want: live play, correspondence chess, problems, videos, articles and all that.  The features I use the most are the live play and the correspondence.  I love the CC because I get an immediate notification when my opponent moves.  I pull my notification bar down, tap on the notification and then the board comes up and shows me the move my opponent made.  I can then open the analysis board and start playing with the position.  When I'm ready, I make my move.  The last thing I have to say about this is: goodbye RedHotPawn/Chess@Work (as soon as I finish my current games at that site).

The live version is stable as well.  When I'm at work and need to take a break, I go to the break room, pull up the app and play a few 5 3 games.  The interface is nice, clean, easy to use.  At night, after the kids are in bed, I get my tablet out and play 30 5 games.  Again, the biggest thing I'm happy about maybe isn't so much the app as it is the chess.com community - I can always find a game on chess.com; whereas I may not always find a game on FICS.  With this app, I think my FICS days may be over.

Chess Visualization Trainer
The other app I use almost on a daily basis is Chess Visualization Trainer.  I mainly use this to memorize the colors of the squares.  I has other functions, but I usually only use one-square color.  The other options are two squares diagonal, two squares knights move, rooks and queens mate, bishops and knights mate, mate in one and mate in two.

Analyze This
The last of the three chess apps I'm using these days is Analyze This - Chess (Free).  I needed a plain 'ol board to play the Pandolfini solitaire chess games in the Chess Life magazine each month.  It does the job and the interface is clean - nuff said.

SEPTEMBER 22, 2012 (ORIGINAL POST)
A few months ago, I upgraded from an HTC Incredible to a new (restocked) Samsung Galaxy Nexus.  The Nexus has a much bigger screen than my Incredible.  As such, playing chess on the Incredible was a bit more difficult than playing on the Nexus.

So now that I had a bit bigger screen, I started really looking for a good chess app to play - especially one that would allow me to connect to FICS.

With that said, here's a list of the chess apps I have either used before or I have now and regularly use.

Chess Free - by AI Factory Limited
Chess Free is the first app that pops up on a search at Google play.  This was the app I had on my Incredible.  It is a good computer app - good graphics; lets you export games to a .pgn file.  I imagine most people marginally interested in chess would download this app; and rightfully so.

Mobialia Chess
Mobialia Chess allows you to log on to FICS.  I remember having issues logging onto FICS when I installed this on my Incredible.  I just installed this app on my Nexus and tried logging into FICS again ... same issue - it just sits there trying to authenticate me - not impressed.

Chess Lite by Odesys
Chess Lite is another FICS-connectable app.  If I recall, it seems to work, but the graphics weren't all that great.

Yafi Internet Chess
Yafi is also a good client.  I use this chess app the most - especially when I have time to kill and want to play a quick 5 0 game.  It appears the developer is continuing to work on this app and I think this app has the best potential of all the FICS-related apps.

Tactic Trainer by Core Games
I love to do tactics.  I normally get my tactics fix on ChessTempo.  I can do tactics on CT from my Nexus, but since there is no app for CT, I have to use the browser interface ... I then have to zoom in and I usually can't get the zoom quite right, causes fat-fingering moves/mistakes ... anyway, I did find an app dedicated exclusively to chess tactics.  Tactic Trainer has 20,000 problems!  By comparison, CT has just over 54,000 problems - obviously not as many, but at 20K, that's still quite a lot.  It will track your rating progress and the interface is really good.  I wish Richard at CT would hook up with the developer of this app and collaborate on a ChessTempo app.

I just ordered a Samsung Galaxy Tab 2 (10.1) this week with a small bonus I received at work.  The Tab 2 should arrive on Thursday.  I'm sure I'll find lots of different and neat uses for the Tab 2, but the biggest reason I wanted it was so that I could play chess anywhere - only on a bigger screen than my Nexus.  I'm looking forward to doing a lot more tactics at CT on the Tab 2.  I'll also be able to use all the above apps and play chess on a bigger mobile display.  I'm sure I'll start playing more 5 0 games at ChessCube than on Yafi.

If you're an Android / Google user, what are your favorite chess-related apps?

I'm starting to play chess more than ever; at least more than I have been playing in the last 10 years ... and I'm enjoying it for now.

The goal of my 52-games per year quest over the last two years was intended to just get myself to play more often.  At first I tried to play 75 5 games, 120 5 games and even 60 5 games; but I have since landed upon the realization that shorter, more frequent games was more enjoyable.  So, these days I'm playing more 30 5 games.

With that said, I was behind in my effort to play 52 games between September 2012 and August 2013.  Over the last few weeks, I really focused on trying to fish for a 30 5 game on FICS.  As was usually the case, it was hit and miss ... sometimes I could find a game, but most times I tried, no one was willing to play.  Also there have been multiple hackings going on over there the last few weeks.  So with that in mind, I decided to give chess.com a whirl.

I downloaded the Android app on my S4 as well as my tablet.  And then, on most evenings, after I fire up the app, I'm able to find a 30 5 game relatively quickly.  The chess.com app and web interface are just fine and quite reliable.  I'm also enjoying the extensive educational content they have on their site.  They have live games as well as correspondence games.  I just started my first CC game over there today.  If ever you want to play me (live or CC), look for me on chess.com.  In summary, my days at FICS may be over as I'm contemplating upgrading from a free account on chess.com to one of the paid accounts.

Anyway - back to the 2012-13 season - I was able to complete playing 52 games.  I have already kicked off my 2013-14 season, again with the goal of playing a minimum of 52 games.  Although, I think I'll end up playing much more than 52 with my preferred 30 5 time control.  I'm keeping tabs on my seasonal progress in the link to the right in the section GAME PLAY STATS.

Lastly, I had another great day at ChessTempo ... going 10/10 in my warm-up problems and then 20/20 in my blitz attempts.  My performance always seems to by cyclical ... I perform great for a while and then out of no where, I come crashing down.  I'm just trying to focus on consistent, good performance.
Posted by rockyrook at 3:28 PM No comments: