How We Decide by Jonah Lehrer 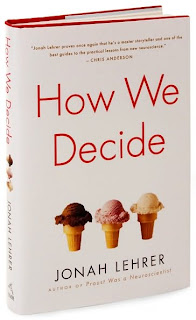 So I'm on a bit of a intellectual-reading kick this month.  After summarizing what I learned from Waitzkin's book, I picked up Jonah Lehrer's book.  This one has been on my to-read list for a couple of years now.  Since it fit so well with Waitzkin's book, I moved it up in the queue and dove into it a little over a week ago.

This book was a really good read with lots of fascinating stories and experiments - all of which were highly stimulating.

I'd love to re-cap all the stories and main points, but there is just so much and all the chapters are inter-connected to make one big point.  So instead of doing a full-recap, I'd rather advise you to go to the library, check this book out and then read it.  There is a lot to chew on and a lot of little things you can learn from this book.

Another major point that had major overlap with Waitzkin's book, dealt with when to use our emotions.  If, we've done the "perfect practice" and have refined our area of expertise with many years questioning about how we've could have done better, then we would best be suited to use our "gut feelings."  Waitzkin talked about this in his book.  Lehrer also cited quite a few people - from professional backgammon players to quarterbacks to professional poker players - who practiced, practiced and practiced until they were "dreaming it"  Then, and only then, could they begin to rely on instinct.

On the flip side, our instincts will fail us when we are presented with random situations.  The recounting of the 1980 NBA team the 76ers and the study of the "hot hand" was truly fascinating.  The "hot hand" statistically does not exist.  Our minds are fixed to look for patterns, but when patterns truly do not exist, and our minds are think there is a pattern, then our instincts are worthless.  So, we've got to know when to rely on our gut feelings and we also have to know when to not rely on them and instead, rely on our reasoning.

The story of the veteran smokejumper who was confronted with certain death was amazing.  The smokejumpers were dropped into a fire, but the conditions changed in a heart-beat and suddenly they were being chased by a wildfire.  They began running from the flames, but one smokejumper overcame his instincts to run and instead stopped and thought creatively.  He lit a fire!  He purposely burned a fire and then hunkered down while the wildfire passed over him.  He was one of a few who survived and his creative technique is now common practice for smokejumpers.  The other similar story was of the pilots of Flight 232 who miraculously crash landed the plane - they too were confronted with a new scenario.  They emotions bought them some time to reason their way out of the pinch

But now we flip back.  Sometimes emotion helps, other times it hurts us (the smokejumpers who didn't survive).  Reason is good when confronted with a new situation ... but what if we get trapped into paralysis by analysis?  Or what if we choke?  This sometimes occurs when we are very proficient at something, but then we begin to over-think it.  When we should be on auto-pilot, our unwanted deliberate thoughts begin to interfere with our performance - we literally choke and fail.  When confronted with over-think, we should recognize it and then begin to train with cue words.  Again, when we've gained proficiency, we need to let our "auto-pilot" take control.  If our micro-manager sneaks in, we need to kick him out.  We can train our minds to think in broad strokes rather than the micro.

Lehrer also gets into it a bit about the moral mind.  That was also an intriguing chapter about what makes us human - the ability to think about how others feel and thus act accordingly.

Lastly - he puts it all together by giving tips on when to use emotion versus when to use reasoning.
When expertness has been reached, gut feelings are the way to go
SIMPLE PROBLEMS REQUIRE REASON
NOVEL PROBLEMS ALSO REQUIRE REASON
EMBRACE UNCERTAINTY
YOU KNOW MORE THAN YOU KNOW and
THINK ABOUT THINKING.

On that last point, he says, "if you're going to take only one idea from this book, take this one: Whenever you make a decision, be aware of the kind of decision you are making and the kind of thought process it requires.  The best way to make sure that you are using your brain properly is to study your brain at work, to listen to the argument in your head"

And consider this passage ... "Of course, even the most attentive and self-aware minds will still make mistakes.  Tom Brady, after the perfect season of 2008, played poorly in the Super Bowl.  Michael Binger, after a long and successful day of poker, always ends up regretting one of his bets.  The most accurate political experts in Tetlock's study still made plenty of inaccurate predictions.  But the best decision-makers don't despair.  Instead, they become students of error, determined to learn from what went wrong.  They think about what they could have done differently so that the next time their neurons will know what to do.  This is the most astonishing thing about the human brain: it can always improve itself.  Tomorrow, we can make better decisions."
Posted by rockyrook at 10:20 PM