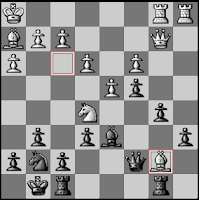 This was the first round of the 4-day and as such, it was played on a Friday night, with the playing hall about 1/4th full and with mostly adults at that.  This was the most quiet round of the tournament.  Rounds 2-7 were quite noisy for this smaller playing hall with lots of scholastic players.
Posted by rockyrook at 11:57 AM