Hope Chess at its Finest

Hope chess is when you make a move and don't look at what your opponent might threaten on his next move, and whether you can meet that threat on your next move. Instead, you just wait until next move and see what he does, and then hope you can meet any threats.

Yes, I may have been half asleep during this game and yes I do have a final in school that is coming up, but the truth of the matter is that I was unprepared and it was quite an embarassing loss. Kudos to my opponent for playing so well.

Here is where I lost the game: 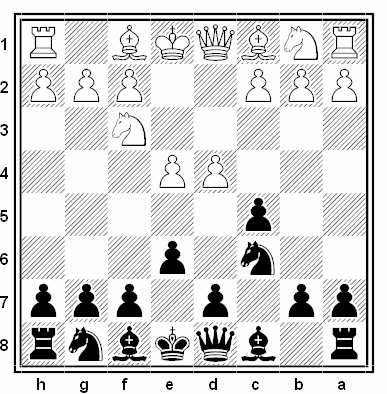 For the life of me, I didn't know what to do. So I just moved Nc6. From then on it was over.

I took advantage of this loss and actually looked up the correct book moves for this opening. I can't remember what it's called, but the proper move would have been d5. So this defeat wasn't a total loss.

You can replay the whole game. Just click on my "Some Standard Games" link. The match was against RobertRoy. I have two games in the DB. One is annotated by Chessmaster 10th ed. while the other is by Fritz 8.

I've been so busy with other things lately, that I've not been practicing my tactics for two days now. I think I need to correct that.