I lost. But I'm more satifsifed with my effort this week than last week's effort.

Here is the position that I faced that could have made me a hero. Instead, I dropped the ball. But even if I made the move, my opponent was a very solid player and probably would have made it tough to finish him off. 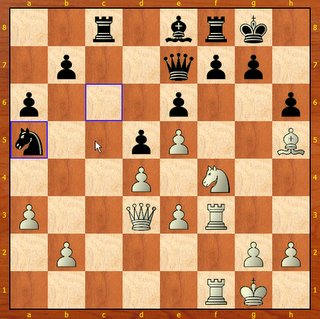 I was pretty concerned about the knight posted on a5. I could see myself tripping up and getting forked someplace. Plus I saw him possibly checking my king while releasing an attack with his rook on my queen. Seeing all that, I focused a lot on the lower-left rather than the upper-right.

I was also using a lot of time. I had about 30 minute on my clock at this point.

Anyway, the correct move should have been Ng6. My opponent said so after the game and Fritz confirmed it.

More tactical studies this week. I should be finished with my first circle and then I'm going back to concentrate on the first level to get those down pat.
Posted by rockyrook at 9:56 AM