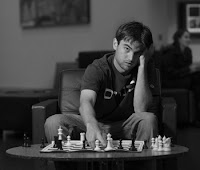 "Although Shankland admitted he does not know for certain how his improvement compares to all other players, he said it was a quicker improvement rate than many of the best in history, including Bobby Fisher."

“I have a lot to learn about modesty. I’m not as modest as I’d like to be. It’s one of my big problems in life I guess or one of the problems with my character.”

Now for the good inspiring stuff ... “Chess has also sort of made me learn to fight adversity a little bit better.” As a child and even during the beginning of high school, Shankland said he was “ruthlessly made fun of.”

“It definitely taught me to keep on fighting even if other people are making fun of you or whatever. Just believe in myself.”

source: Chess King
Posted by rockyrook at 11:33 AM